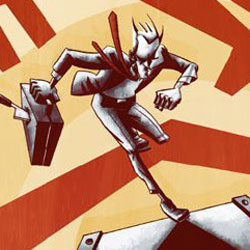 According to the author, “A reclusive man gets a strange key from his deceased father and must brave a mad world in search of answers. His neighbors, however, have other plans.” And also a sandwich with a live bird inside of a dead fish. (Yes, that is in fact as strange as it sounds.) The book begins with a flashback to 1877, but from my reading of the book, I think that may be a typo. During the present-day sequence William mentions his father, who had been hired by the Gadsworth company to construct a town, died “nearly forty years ago,” but managed to send William the key to the mysterious box that is the MacGuffin of the story. During the flashback, a character named Gadsworth, presumably the owner of the Gadsworth company William’s father was hired by, comes to an encampment with various equipment belonging to the Gadsworth company lying about. The encampment is full of skeletons and corpses, and eventually seizes the box from a corpse that is revealed to be Gadsworth’s father.

The town that William’s father was hired to build was designed to safeguard that box, and if I’m reading things right the Gadsworth that took the box in the flashback was taking it from the remnants of the town William’s father was building (and potentially from William’s father himself; there are some similarities in build between William and Gadsworth that would suggest the possibility of their being related). So I believe that the initial flashback was mislabeled as 1877, and SHOULD have been 1977. There are also several other typos of lesser consequence in this issue, the word “sandwich” is misspelled as “sandwhich” a few times, though other times it is spelled correctly. It’s not a big deal, but it smacks a bit of laziness when you spell it right some times and wrong others. Having said that, I will probably end up doing the same with some typos in this review, due to force of irony.

The portion of the story involving William is mostly enjoyable—it begins with a wonderful scene in which William is speaking to a cockroach. The entire scene is quite easy to relate to, which is a good way to get readers interested in and used to a protagonist. We then get a bit of plot build-up, and our hero sets out on his epic journey—except his neighbors have other ideas. The crazy old man next door strongarms William into coming over to their apartment and trying his wife’s latest sandwich creation. This is where the issue gets really weird. As a reader, I automatically assumed that something bad was going to happen (the kindly old couple ALWAYS turn out to be serial killers or something of the like), but I honestly can say I did NOT expect, after the hero is handed a sandwich largely consisting of two slices of bread and a whole fish, for a BIRD to FLY OUT OF THE FISH’S MOUTH. That’s right. A bird flies out of a dead fish’s mouth. I understand that the writer was going for a bit of shock factor and a “holy crap, that’s cool” moment, but it’s more silly than anything. And the art just doesn’t manage to persuade me that a bird could have been inside of that fish, nor does it convince me that if a bird somehow were inside the fish’s mouth, that it could have gotten out of the fish and flown away given the grip that William had on the sandwich.

After that, the book gives us the predicted battle between the killer old couple at the protagonist, the old couple having been hired by Gadsworth to kill William and take the key his father had given him. The issue ends with William walking off into the city, leading into whatever adventure awaits.

The issue begins with a very cinematic piece, showing a large crate partially covered by snow, then a light in the distance, zooming in on the source of the light, the leader of an expedition to the Gadsworth encampment. I like the shot conceptually, but despite the fact that the character HAS to have moved based on the positioning of the rest of the scenery, he is in almost exactly the same position. I had an opportunity to speak with Kevin Maguire when I went to C2E2 in 2010, and asked what he felt the most important piece of advice he could give an artist was. His response was to think of your characters as figures in action, rather than action figures. I like much of what Phil Sloan has done in this book—I believe that scene is the only one in the entire comic that was posed in a stale fashion. The rest of the book is more fluid, and some of Sloan’s shot choices, such as in William versus the cockroach, are brilliant. Sloan’s characters are also very expressive, and the action scenes are very dynamic.

I don’t entirely know what to think of this issue. It took me a long time to finally figure out what was going on with the story (my assumption that the 1877 flashback date couldn’t be wrong being the primary deterrent to my comprehension), but once I got past that (and accepted the ridiculousness of the bird flying out of the fish) I liked the issue reasonably well. It’s not a great work by any means, but it’s got some neat art, and I’m at least curious where the story is going. The issue is only $0.99, which is a great price to try it out, and it can be bought in PDF format directly from the creators’ web site at http://www.deadhorsecomic.com/buy/ or you can pick up the issue from Graphicly.

I give this issue three out of five stars, with the recommendation that for less than a dollar for a #1 issue, it’s definitely worth trying. I’ll probably be around for at least one more issue, and hopefully some of my concerns will be addressed.