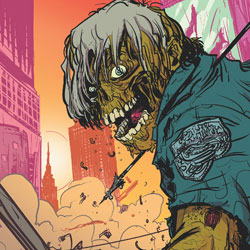 From the creators of THE AMORY WARS saga and KILL AUDIO comes a deadly new vision of New York City! The zombie apocalypse has transformed the city into two separate battle-hardened fiefdoms! And only one man, whose family has been ripped away from him, stands between these two warring factions. Wielding an artifact from the past that imbues him with a surprising power…find out what happens when he discovers THE KEY OF Z.

The DARKWING DUCK/DUCKTALES crossover event twenty years in the making picks up from DUCKTALES #5 here — with this issue marking Part 2 of “Dangerous Currency.” Whatever happened to Fenton Crackshell, the original Gizmoduck? Darkwing Duck and visiting Duckburg tycoon Scrooge McDuck intend to find out…that is, if they don’t disappear themselves! Second to last issue—with DARKWING DUCK #18 coming out the same month. It’s the end of an era as KABOOM! says goodbye this month to Disney in a final epic story spanning DARKWING DUCK #17, DUCK TALES #6 and DARKWING DUCK #18.

LAST ISSUE! The final chapter of The War for the Uncharted Territories concludes here! Sacrifices have been made and the crew of Moya will never look at their quest the same way again. For Crichton and Aeryn, this is the moment their entire lives have been leading up to! Don’t miss the last issue of one of the most beloved science fiction franchises of all time! From FARSCAPE creator Rockne S. O’Bannon and fan-favorite writer Keith R.A. DeCandido!

Spaced Warped Strikes Back! Far away, in a land long ago…an unlikely band of travelers embarked on a hilarious journey through one of the greatest science fiction franchises of all time! In the tradition of ROBOT CHICKEN: STAR WARS and SPACEBALLS, this loving, affectionate parody continues! The next chapter in this hilarious saga begins here, as the fan-pleasing romp that skewers one of the greatest adventure stories ever strikes back!

DUCKTALES is back! The hit Disney Afternoon TV show makes a splash this month with the first all new collection of “Rightful Owners.” Written by the creator of the Epic Mickey video game, Warren Spector, and illustrated by MARVEL SUPER HERO SQUAD artist Leonel Castellani, this is the latest and greatest from the Disney Afternoon Revolution that “might solve a mystery,” but will definitely “rewrite history!” Existing in the same continuity as KABOOM!’s hit series DARKWING DUCK, find out why “life is like a hurricane” as Scrooge McDuck, Launchpad, and the gang jet set to the sites of McDuck’s most infamous adventures to return his whisked away wealth and take on some restless natives along the way!