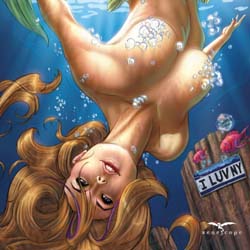 A cute naked girl shows up at your beachside doorstep. She wants to know if you have something she can wear. Welcome to Grimm Fairy Tales Myths & Legends #8. If this whole thing sounds a little fishy, take the plunge. Previously, in Grimm Fairy Tales – Myths & Legends: Erica wakes up along the shoreline, unsure of how she got there. We learn that this is not the first time she’s experienced such phenomena, but this time she feels as if it’s ‘different.’ This time, she’s scared.

Luckily she’s within walking distance of her boyfriend’s place and he answers her knock at the door, finding her completely naked (except for a strategically held piece of discarded cardboard). He doesn’t seem to have all that many concerns, because it’s not until about ½ way through the comic and several scene changes before he even asks what happened. Talk about a trusting boyfriend!

Her parents are worried sick about her, but thanks again to the assistance of her boyfriend, she returns home to doting parents. Although their incredibly spacious home would indicate a significant degree of wealth, it’s sparsely decorated and the phone her parents have been focused upon is easily circa 1985. Real old school here, with a rotary dial and everything.

It turns out, this is the eve of her 18th birthday and her parents have planned quite the shindig for their very beautiful (and forgetful) daughter. In the meanwhile, throughout the course of her day of preparation, some otherworldly forces are paying close attention to her activities. The mystery continues to grow deeper until everything culminates at the peak of her birthday party.

The art is not strong in Myths & Legends #8. Proportions are off, gigantic interior settings are unrealistic and the portrayals of males are particularly doughy. The physical attributes of the female form are a strong focus in this book, and thankfully the artwork from Miguel Angel Garrido & Rain Lagunsad is more skillful.  Some of the scenes of Erica cavorting with her girlfriends are gratuitous but playful.

The overall plot is relatively interesting, although the characterization and dialogue is pretty single-dimensional. Erica isn’t a very engaging protagonist, but it bears mentioning that I’m jumping in at issue #8 and perhaps more development has been established in prior issues.

BOTTOM LINE: Pretty Girls, One With A Tail, Pretty Mediocre

Unless you have a strong penchant for mermaid stories, there’s nothing terribly read-worthy within these pages. Some of the bubbling-under story elements may pay off dividends later in the series, but I wouldn’t hold my breath.  Grimm Fairy Tales Myths & Legends #8 earns 2.5 out of 5 stars.