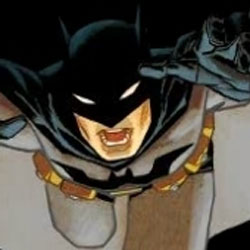 Warner Bros. has done a good job of taking their properties and turning them into direct to the home market animated movies. While we are all still waiting for The Dark Knight Returns, Warner Bros. has finally adapted Frank Miller’s Year One that brings the four arc story to life. As far as adaptations go, this is a pretty faithful adaptation of the story Frank Miller told in the pages of the pages of Batman #404 to #407. If you haven’t heard the Major Spoilers Podcast where we talked about the story in-depth, you can check it out here.

This is the first year of Batman and Jim Gordon in Gotham City and as each try to find direction, they also discover that there are those that want to keep the two in their place. While the comic book had a pretty even mix of Gordon and Batman action, the movie tends to lean more toward the Jim Gordon story than anything else. At first I was a bit disappointed in this because with Batman in the title, but after watching the movie a couple of times, I think directors Liu and Montgomery made the right choice in reducing Batman’s time on screen and shifting the story to Gordon and the relationship the two end up building.

When you try to condense an entire year into four issues, things are going to feel chopped and disjointed. When you try to take that same story and condense it to a 64-minute movie, that disjointed feeling is magnified even more. And that is really the biggest problem with the movie – the creators should have made it longer, or found a way to focus only on one specific area of story to expand upon. For example, while a great deal of attention was heaped upon Alex Rocco as Carmine Falcone, his role in the movie was basically a few lines and that was it.

Once again, the animation style featured in Batman: Year One walks the line between traditional Western animation and anime. Sometimes the style works, and sometimes it doesn’t. For this movie there were times when I was annoyed by the style, but for the most part I liked the imagery and action presented. The final chase and fight scene on the bridge (you know the one), really works better on the screen than it does in the comic, but oddly, the scene where Bruce Wayne rumbles with pimps, Holly Robinson and Selina Kyle seems awkward at best.

With this story focusing on Jim Gordon, a man coming into his job with good intentions and ultimately being changed by the experience, the producers and Andrea Romano nailed it by hiring Bryan Cranston, of Breaking Bad fame. Cranston is a real professional, and throws himself into the role of Jim Gordon. Though I praise Cranston’s performance, the big problem was instantly recognizing Cranston’s voice which also brought me out of the imaginary world that everyone was creating.

I wish I could get excited about Ben McKenzie as Batman/Bruce Wayne. It’s a voice that just didn’t fit the character on the screen. McKenzie comes off as distant most of the time, almost like he really doesn’t care that he is playing a comic book character. I liked Eliza Dushku, but she really didn’t get a chance to shine in the main feature. She does get more voice time in the Catwoman short that accompanies this disc collection, and if you want to hear that review, be sure to check out Major Spoilers Podcast #353 arriving on the iTunes store this weekend.

Not every Batman animated feature released by Warner Bros. has been a winner. Batman: Year One is one of those that falls into the winner category and is worth picking up. It’s a great look at an important character in the Batman universe, and though Batman is downplayed in the movie, there is still plenty of action to keep viewers glued to the screen. I say pick up the movie (preferably on Blu-ray) and add it to your collection, as I’m giving this movie 4 out of 5 Stars.