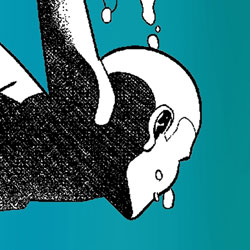 Following up on the news that Brian Wood (DEMO, DMZ, NORTHLANDERS) and Kristian Donaldson (Supermarket) would be bringing their upcoming collaboration to Dark Horse’s premier anthology, Dark Horse Presents, comes news that the three-part storyline will be continued in an all-new series in June of 2012!

The Massive follows a group of direct-action environmentalists after the world has experienced a crippling ecological disaster. With society grinding to a halt and the planet itself in a state of rebellion, this group sails the world’s oceans looking not only for its lost sister ship, the titular Massive, but for some sense of logic in all the chaos. What does it mean to be an environmentalist after the world’s already ended?
“The Massive is the next logical step in my creative output: the world-building and politics of DMZ with the humanity of Northlanders, amped up and truly global in scope” said writer, Brian Wood. “No one is pulling any punches here; Kristian Donaldson is turning in his best work I’ve seen in all our years of collaboration, and the crew at Dark Horse is giving this the five-star treatment.” As previously announced, The Massive will debut in Dark Horse Presents #8 in January of 2012, and will run in three installments through March. The Massive comic series debuts in June!