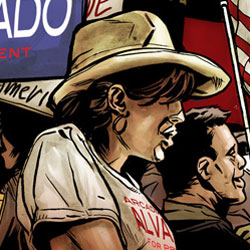 Sci-Fi and modern politics collide in Vertigo’s new ongoing series SAUCER COUNTRY written by Paul Cornell with art by the extremely talented Ryan Kelly. Cornell is best known for his contributions to Dr. Who, and is currently writing DC Comics-The New 52 ongoing comic book series Stormwatch and Demon Knights. Kelly’s, most recent work can be seen in The New York Times Bestseller The New York Five written by Brian Wood.

When the Latina governor of New Mexico is abducted by aliens in the midst of her campaign for President of the United States, she learns that the people of Earth are in imminent danger of invasion. But proving that what she’s seen is true will be next to impossible in a world where “mainstream media” has a major agenda and every politician wants their fifteen minutes of fame.

With the help of her dedicated staff and a rag-tag collection of UFO “experts”, she’ll do what’s necessary to save the human race — which will mean digging deep into the American mythology of alien abduction, UFO sightings, shadow government agencies and conspiracy theory. But first she’s got to convince the world she’s not crazy…