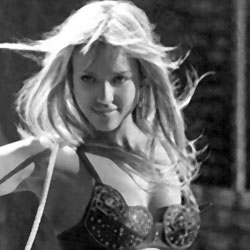 At the Legendary Comics panel at the New York Comic Con, Frank Miller confirmed that new Sin City stories were on the way.  Miller also confirmed that he has “every intention of doing them with Dark Horse.”

With a new movie supposedly in production, and knowing that Dark Horse couldn’t keep Sin City trades on the shelf during the first movie’s release, I expect both Miller and Dark Horse are busy figuring out ways to make maximum dollars on this still very hot property.