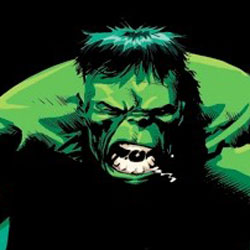 Marvel announced yet another Hulk title is heading our way – Hulk Smash Avengers kicks off in February and will be a five-issue weekly series.  The series will focus on different eras of Hulk/Avengers history with a different creative team taking on the duties of each issue.

The first issue takes place during the Lee/Kirby era of the ’60s.  Tom Defalco and Ron Frenz will have the Hulk fighting Captain America.

Joe Casy and Max Flumara will team for issue two, which takes place in the ’70s just before the events of The Avengers #84-97.

As you might expect the next era will be the ’80s and will be tackled by Roger Stern and Carl Moline.

Issue four features the Hulk against the West Coast Avengers going at it ’90s-style by Jim McCann.

The final issue features the Red Hulk and the Mighty Avengers writeen by Fred Van Lente with art by Michael Avon Oeming.