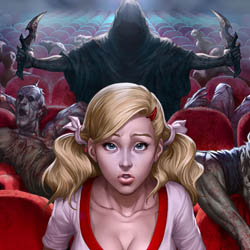 A young couple heads to an old-fashioned movie theater to check out the latest horror movie. He’s way into scary movies and she endures his genre libido. Is this just another night out on the town for our moviegoers, or is this representative of a violent new spin on the term, ‘director’s CUT?’ Grab some popcorn and an $8.00 soda – it’s time for Zenescope’s very own, The Theater #1. Previously, in The Theatre:  “In a quiet New Jersey town, there sits a small, old-fashioned movie theater.  But this unassuming theater holds a deep dark secret, one that threatens the lives of anyone who dares enter it.  When an unsuspecting couple decides to visit the old movie house to watch some horror films, they soon will find that something full of horror is also watching THEM.”

ANOTHER DYSTOPIC ZOMBIE STORY, BUT DIFFERENT

The main thrust of the story focuses upon a zombie apocalypse. The human survivors have had to adapt in order to survive the toppling of civilization. Unlike most dystopian zombie tales, this time out, there appears to be some signs of hope. It looks as if the human population may finally have the situation contained. Armed military personnel are accompanied by men in HAZMAT suits, combining their efforts to clear out the remnants of decay from local homes.

David is just a young boy, but his father is an adept survivor, watching out for him the best he can in this world gone to Hell. Unfortunately, there are still a few straggler zombies and David finds himself face to face with a member of the undead community. His father steps in to save the day, but not before having a nice-sized chunk bitten from his shoulder, infecting him with the zombie virus.

DAD’S FEELING UNDER THE WEATHER

Once home they do their best to contain the injury, including cutting out areas of his flesh that had come in direct contact with the zombie. While this appears to stave off the infection, it’s altogether unsuccessful and it’s only a matter of time before David must face the inevitability of his father’s degeneration.

Most of the ‘real world’ contains traditional comic art while some of the scenes from the horror movie are rendered purely in pencils. This proves effective not only in matching the old 50s style tone of the movie’s black and white subject matter, but also in showcasing the strong penciling skills of Martin Montiel.

Some of the proportions and background depth of field occasionally falters, but the detailed linework is impressive. Garcia’s photorealistic approach to capturing the world of a zombie apocalypse helps root the reader, making the suspension of disbelief a more palatable enterprise.

The relationship between David and his father is touching without feeling overly sentimental. There are some minor rough edges, but overall this is a surprisingly efficient ‘done in one’ comic, well worth the $2.99 investment.

The Theater #1 makes an admirable contribution to the ever-expanding world of apocalyptic zombie comics fiction. The writing and artwork is strong, and the real-world movie theater setting evokes feelings of Creepshow, Twilight Zone, and other examples of the genre. The Theater #1 earns a respectable 3.5 out of 5 stars.