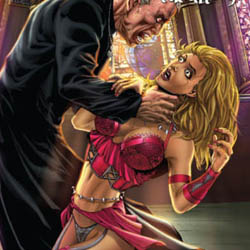 Demonic possession has a way of negatively impacting a family. Little Luke has the devil in ‘im, and with Father Thomas at his bed side, The Haunting #2 is primed for some pea-soup goodness. You’ll need to read on to find out if it pays off. Previously, in Salem’s Daughter: Anna and Braden are just passing through an old-west township. It appears that the two of them hunt spirits, and the possession of young Luke Hunter brought then to these parts. Anna has some type of magical connection, perhaps a sensitive, and Braden appears to be rather adept at kicking ass.

My Mother Does WHAT to WHAT in HELL?!

The story opens with a very evil-looking possessed young boy tied to his bed. He’s lucky to have such an expansive bedroom, because including his bed, 6 additional adults are on hand to witness the church’s attempts at freeing young Luke from the clutches of the big bad demon.

After an adept combination of Latin and scripture, Father Thomas manages to kick ass for the lord, resulting in the kid being delivered from evil. Unfortunately, the demon simply transferred into the body of the priest. We know this because spikes come up out of his face and he looks and sounds pretty angry.

Queue The Locusts – Quiet On The Set!

At this point we’re introduced to the first arrival of locusts. They crash in through the bedroom window and start buzzing about, all annoying and such.  It’s not long before our possessed priest propels himself backwards through the broken window, falling to his death two stories later. We know this because there’s a nasty piece of wood poking through his chest, a bunch of blood, and a vacant stare from the priest.

So, now the spirit is finally purged, right? Prepare for the shocker…it’s made the jump AGAIN.

Remind Me Again…Why Should I Care?

Shallow character development makes it improbable for you to care about where the demon has gone and what its intentions are. Our ‘heroes’ Anna and Braden seem more like set pieces than integral parts of the story.

The art is very simplistic, yet follows storytelling protocols well enough.  I tend to respond more favorably to more detailed pencils, but for an independently produced title, it’s serviceable.

BOTTOM LINE: Two Yawns Do Not Make This a Buy

All around, Salem’s Daughter – The Haunting #2 seems to be a single-dimensional, uninspired quick read. The visuals were not enough to keep me interested, and the story was so thin that there wasn’t enough meat on the bones to satisfy. Promotional material included in this review copy says that the series was called one of the years best of 2009 by the Philadelphia Daily News. I have to assume the previous series was much stronger than this. Salem’s Daughter – The Haunting #2 earns a modest 2 out of 5 stars.