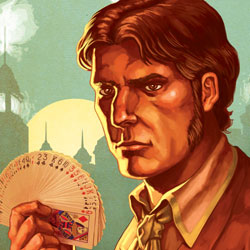 Leading into New York Comic-Con, IDW Publishing today announced the all-new, creator-owned SMOKE AND MIRRORS. Kicking off in March 2012, this five-issue series will set a unique standard for comics. Created by award-winning writer Mike Costa (GI JOE: COBRA, Blackhawks) and acclaimed indie-artist Ryan Browne (God Hates Astronauts, Blast Furnace), SMOKE AND MIRRORS is also the first comics project for Jon Armstrong who is one of the finest sleight-of-hand artists in the world and a consulting Imagineer for Disney Entertainment. This innovative team has incorporated engaging, mind-bending illusions and mentalism principles into SMOKE AND MIRRORS, creating an amazing magical experience using only ink and paper.

“I’ve been with IDW for almost four years now, and in that time they’ve taken some really crazy risks with me in terms of the stories I wanted to tell and the storytelling devices I used to tell them. After showing so much good faith, I decided it was time to return the favor and start taking those risks on a book of my own,” said Costa. “SMOKE AND MIRRORS is my first creator-owned book, and I am immensely proud to have it published by this company that has given the industry some of the greatest creator-owned books of the last decade. The only thing I’m more proud of is the fact that I get to do it with Ryan Browne, a ridiculously talented artist who has been my best friend for literally 20 years, and Jon Armstrong, one of the finest magicians I’ve ever seen, and my friend and mentor.”

Armstrong, Browne and Costa revolutionize the comics experience by using magic as a storytelling technique in SMOKE AND MIRRORS.  SMOKE AND MIRRORS is the story of stage magician Terry Ward, who finds himself transported to a world where Magic is real and he must use trickery and illusions to survive.

“This is my first major finished project with Mike and is the culmination of a lifetime of working on plots and ideas together,” said Browne. “I’m really excited to bring my art and storytelling abilities to the amazing narrative that Mike and Jon have created and fans of my work on God Hates Astronauts will not be disappointed. We will be experimenting with new ways of telling a story and making the reader a part of our adventure–breaking new ground and pushing the medium in directions that it has never gone before. We urge you to keep a second pair of socks handy since the ones you’re wearing are about to be blown off!”

Armstrong adds: “As a life-long comic fan, I’ve always wanted to create in this medium. Being able to apply my unique skill set to comics and working with creators I admire was just way too exciting to pass up.  Because of how I related to our magician and protagonist Terry Ward, I wanted an especially innovative way to use magic as more than a gimmick. Magic is an essential component of propelling Terry’s story forward, while allowing the reader to have the same engaging and amazing experiences our characters are having. I’m trilled to that IDW is letting me play in the world that we are creating.”