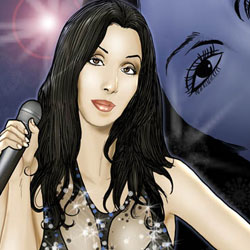 She has had a career that has spanned almost five decades and she looks as amazing today as she did when she first began performing with her first husband, Sonny Bono. Now Bluewater Comics has got her in their latest issue of “Female Force.” “Female Force: Cher” is the new biography comic book is due out in December 2011 and it shares how the woman born Cherilyn Sarkisian came to be known by one name – Cher!

“We have been creating the biographies of the famous in a sequential art form for almost two years and it was only a matter of time before we got to this icon,” said Darren G. Davis, publisher of Bluewater Comics. “Her life has been marked failures and successes, but she still stands boldly for herself and for her friends and we had to tell her story.”

“Female Force: Cher” turns back time and tells how this platinum selling singer became an award winning actress and a performer for the ages.

Writer Marc Shapiro said Cher’s life and career “reads like a comic book.” “The clothes, the times, the attitudes of the decades she’s lived through. The different styles of music she’s been involved in. So much of what Cher has experienced is so flamboyant, over the top and just plain out there,” said Shapiro. “She has been very much the real life equivalent of a superhero, and writing about Cher, to a large degree, has been just about letting my imagination go.”

The 32-page comic features the art by Zach Bassett and the inks of Warren Montgomery as well as a cover by provided by DC Comics Joe Philips.

The “Female Force” comic series offers a broad examination of strong and influential women who are shaping modern history and culture. In past issues, the monthly series has featured, Madonna, Britney Spears, JK Rowling, Ellen Degeneres, Selena Gomez, Sarah Palin and others. For more information on “Female Force: Cher” and other comics from Bluewater Productions, go to our comics section or check them out in your local comic book shop, Barnes & Noble and Amazon.com.

The “Female Force” comic book series has been seen in “People Magazine”, “The New York Times”. “Star Magazine”, “Billboard Magazine” & “Time Magazine” as well as on “The Today Show”, “ABC Nightly News” and “E! News Daily” and 1,000’s of other places.

Bluewater Productions Inc. is one of the top independent production studios of comic books, young adult books and graphic novels.