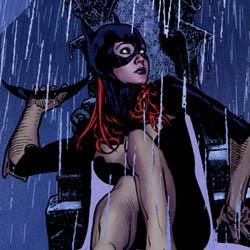 Or – “Batwoman Stole Most Of Her Old Look Anyway…”

I think that the cover of issue #2 has hit on what has been bothering me about this relaunched character:  Barbara Gordon, while essentially the same, has been considerably de-aged conceptually.  It’s nearly impossible to imagine the mid-30ish Oracle, a former Congresswoman and a match for Bruce Wayne himself in the shoes that the first issue put her.  This cover shows a young woman of maybe 25 years of age, and with that realization, something clicked in my head, putting issue #1 in a whole new light.  Will #2 give me more food for thought? Previously, in Batgirl:  Barbara Gordon’s career as Batgirl was interrupted by a bullet from the Joker which left her paralyzed and in a wheelchair for several years.  Now, she’s back in action, and has found a new home, a new lease on life, and even a new boyfriend candidate.  Unfortunately for Batgirl, she’s also found a new villain who fits in perfectly with the rest of the Gotham City lunatic fringe, and he’s targeting her specifically (in both her Batgirl AND Barbara identities.)  Will The Mirror put Batgirl back on the shelf?

FIRST, WE GET SOME OF THE BAT…

This issue picks up literally seconds after last issue and the confrontation during which Batgirl froze at the sight of the Mirror’s gun.  Her hesitation led to an innocent man taking a bullet, and as we open, The Mirror makes his escape.  Having read all of the relaunched Bat-titles, I find it interesting that this book and Batwoman are the most accessible for me, and as Batgirl leaps into action, I remember why.  The Mirror is more than a match for her physically, and out-thinks her high above the city, causing her to take a damn near fatal spill.  I can’t imagine Bruce Wayne (or even Dick Grayson) being put in the same situation and having it work.  On the down side, I can’t imagine the writers ever putting Bruce Wayne in that situation, but Gail Simone’s writing makes the sequence work, as Barbara tries to shake off the rust from three years off the streets, and has to remember what it is that she’s best at.  There’s also some strong character work with Detective McKenna, the partner of the Gotham City cop that the Mirror killed last ish, as she shows herself to be strong and driven in kind of a Renee Montoya vein, and I’m quite certain that we’ll be seeing more of her in the future.

…THEN, WE GET SOME OF THE GIRL.

Batgirl trails the Mirror to the last cemetery within the city limits of Gotham, and Barbara muses about WHY it is still where it is (rich folks have pull.)  For some heroes, this information would have seemed out-of-place, or overly expository, but for Batgirl it helps to put across the fact that she’s always thinking, always processing, and that she remembers everything she’s ever read.  (At least, pre-Crisis, she did.  I don’t know if Barbara’s photographic memory even made it past the ’86 CoIE, much less this latest revamp.)  Batgirl makes mistakes in this issue, but regains her stride when she starts connecting the dots, honoring her intel-gathering roots as Oracle, and I really fell in love with her new roomie during their interactions.  (Short form:  New roomie believed that the obviously injured Barbara had been beaten up by a boyfriend rather than a crazed super-villain, and was ready to call the cops on him, a very effective scene.)  Things end with another big cliffhanger, as Batgirl discovers that Mirror’s true identity, but finds that he is a step or two ahead of her.

THE VERDICT: MANY THINGS BROUGHT TO LIGHT…

Last issue, like many of the DC New 52 #1’s, hit the ground running and gave it’s all to set a dynamic tone.  This issue slows down a bit, building some relationships with Daddy Gordon, with the roommate, with the new boyfriend, and gives The Mirror not only a tragic origin, but a wild-eyed demeanor that makes him unnerving as all hell.  The fact that Batgirl is physically overpowered by the villain and has to reconfigure her battle plan comes across very well, and the art throughout the issue is moody and interesting without falling into the trap of being dark and muddy.  Ardian Syaf delivers a younger Batgirl, and makes her completely believable as a young woman and as a superhero, which is a tough proposition, and his mirror effects are pretty cool throughout the issue.  Overall, Batgirl #2 is an improvement on #1 (which, since I didn’t review it, I should clarify was about a 3 star book for me) and makes me less worried about the larger character arc for Barbara Gordon, earning 4 out of 5 stars overall.

Faithful Spoilerite Question Of The Day:  Is there really anything wrong with a grown woman deciding (in-universe, mind you) to self-identify as a BatGIRL?