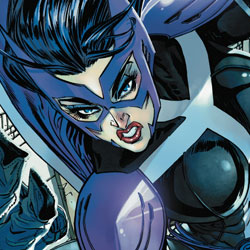 Even though it is October, DC continues to roll out new number one issues. Helena Bertinelli (or is it?) gets the relaunch treatment this month, and we don’t want to leave anyone behind in our New 52 coverage. Previously in Huntress: First, she was Paula Brooks of the Golden Age. Then she was Helena Wayne of Earth-Two. She then became Helena Bertinelli (no relation to Valerie) and had many great adventures as part of the Birds of Prey. She been in the JSA, the JLA, Justice League Unlimited, and Batman: The Brave and the Bold. For whatever reason, she wasn’t considered a strong enough candidate for the initial DC Relaunch, but that’s okay, because she gets the spotlight in October.

BIRDS OF PREY: THE PREQUEL

Paul Levitz seems to be hit and miss when he jumps on a project. This time out, it seems Levitz has done something right by combining a strong character, with a tale of revenge, detective work, and an international flair. The story focuses on Helena traveling to Italy with the mission to stop what she believe to be a shipment of drugs from reaching Gotham City. What she uncovers is a world of international sex slave trafficking and gun smuggling that appears to be centered in Naples. This sets Huntress off on a new mission – figure out who is trafficking in women, and to bring them down.

It’s a great revenge tale, and with the big bad not giving anyone a chance to make a mistake unless they want to die, the showdown between the hero and villain is going to be a good one. The heroine is everything a heroine should be, while the villain is the worst kind of human. Yes, it is stereotypical, but in a company that is going through a lot of change (some drastic, some not so much), having a book that feels familiar is a nice place to be.

It should be noted that in this book, Helena is Helena Bertinelli, and not any of the other Huntress names that have been flung about over the last 60 years. Or at least that is what her passport says, and what we are lead to believe – even if she calls herself Esposito in the issue. While the story is engaging, and I can’t wait to see what Levitz has in store in the next five issues of this mini-series, the bigger mystery is in seeing how DC ties her into the rest of the New 52. She’s been teased to be connected to the Justice Society of America, but we know the JSA is part of Earth-Two in the New 52, so I wonder if this story takes place in that universe and not the new one. Last month’s books featured the Mysterious Woman somewhere in the book, and unless I’ve missed something, I didn’t see her in this number one, further confusing Helena’s place in the multiverse. Confused yet?

From the first page to the last, the art team of To, Dell, and Dalhouse rock this book. Strong character poses, excellent inking that is sharp where it needs to be and less detailed in spots works well, and the colors bring the page to life. I like the cluttered backgrounds in those panels where readers can see the environment. The clothing isn’t too detailed or cluttered unnecessary lines. If I had one complaint it would be that sometimes, just sometimes the faces get a little wonky in three-quarter profile, but other than that, everything is great.

BOTTOM LINE: I’D RATHER HAVE A MINI-SERIES THAN NOTHING

While the Birds of Prey have been scattered to the four winds, having stories featuring the characters individually is better than nothing. Huntress #1 is a perfect blend of action and story telling that would be a great lead in to further adventures of the hero. While I don’t think DC will turn this into an ongoing series, the team has done a great job of making me want more. Huntress #1 is worth picking up and reading and earns 4 out of 5 Stars.