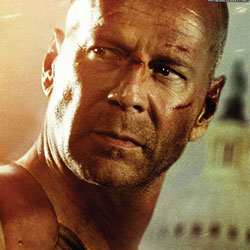 I know what you have been thinking, “Self… what the movie industry really needs is a shot in the arm that only John McCain can provide.”

Hate to break it to you, but John McCain isn’t going to be in a movie anytime soon, but John McClane is headed back to theaters in 2013 in A Good Day to Die Hard.

Apparently, Bruce Willis thinks the Die Hard franchise will never die, and is returning to a role that made him more famous (Moonlighting put him on the map).  A Good Day to Die Hard will be set in Russia and features McClane traveling to Moscow to figure out a way to kick his son (not seen since the first movie) out of jail.  Of course when John McClane is involved, something is bound to happen that will lead to things blowing up, and people shouting Yippie-Ki-Ay! as they blow other things up.

Tom Rothman, co-chairman, and CEO of Fox Filmed Entertainment didn’t know if the movie was going to be PG-13 or R rated.  HINT: Make it an R-rated flick for maximum