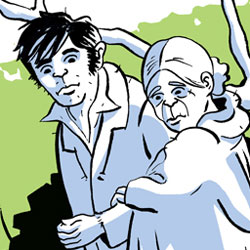 Graphic novelist, John A. Walsh, is turning to the Internet to raise funds for his Graphic Novel, Go Home Paddy, a tale of a 19th Century Irish refugee washing up on the shores of Boston. Funding is a significant hurdle in getting any Graphic Novel completed and the current state of the economy is only making that challenge more difficult. Authors have to develop more inventive fundraising strategies, and the creative community has begun to look to sites like Kickstarter.com for help.

Kickstarter.com’s guidelines state that Artists have a set number of days to raise all the funds, or the project receives no financial support. Walsh’s Graphic Novel has a 45-day fundraising window. If the designated amount ($5,000 US) isn’t raised before November 19, all pledges are cancelled and the project will not be funded. Walsh has already raised 50% of his goal in only six days.

Walsh stated that the Kickstarter model was so appealing due to “the possibility of not only raising the funds, but also raising Go Home Paddy’s profile. I’m really hoping to share the story with as many people as possible.” Amazon.com, Kickstarter’s merchant-partner, allows for each project to receive funds from anywhere in the world. The Go Home Paddy Kickstarter Page can be found here: http://kck.st/r5RJ5y

Walsh believes that the story, if funded and completed, could easily be a great resource for both Educators and Students. “The Great Irish Famine is included in the history and human rights curricula of elementary and high schools in New York, New Jersey, Illinois, Connecticut, Maryland, Oregon and Ohio. Numerous Universities throughout the United States offer Irish Studies Programs, including Georgetown, Loyola, Boston University, Boston College, and Notre Dame. Besides the ‘Irishness’ of the whole project, I think the story examines many of the major issues in our society—immigration, race and religion.” Walsh is hoping to, “really connect with lover’s of not only Irish-American history and culture, but also devotees of Graphic Novels.”

Walsh’s Graphic Novel, Go Home Paddy, is the tale of one Famine era Irish immigrant’s aching struggle to succeed in a Bostonian society that fears and hates him while not forgetting his own people’s wretched history. The story incorporates historical details such as the Great Hunger, the rise of the Know-Nothings, Victorian prejudices and the Great Boston Fire of 1872. A Graphic Novel of approximately 150 pages, Go Home Paddy is illustrated using the Victorian simian stereotype of the Irish.

About John A. Walsh:
John A. Walsh is the Author and Illustrator of the Graphic Novel Go Home Paddy — which is being serialized at www.gohomepaddy.com. The illustrations from his historical short story Goody’s Lament were featured in the annual research journal for the College of Arts, Social Sciences and Celtic Studies at the University College of Cork Ireland. He is formerly the Editorial Cartoonist of The South End News in Boston.