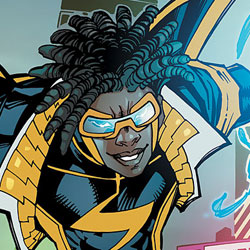 DC Comics has announced that Marc Bernardin has been hired as the ongoing writer for Static Shock.  Bernardin’s duties begin with issue #7.  Scott McDaniel will continue as the artist on the series.

“The thing that excites me, as both a writer and a reader, about STATIC SHOCK is that it features a hero that we don’t really know yet — at least, in comics, anyway. (Fans of the Static Shock TV show will kindly forgive me.) Virgil Hawkins is young, still figuring out the full extent of his powers, and navigating the full range of teenage tragedies: Being the new kid in a new school, asking out the pretty girl, finding time for his homework, etc. And he’s one of the few young heroes without a built-in father figure: He’s not an offshoot of Batman, Green Lantern, Flash, Wonder Woman, or the Martian Manhunter. He’s his own man, for better or for worse. And all of that offers a lot of grist for the writer-y mill. And I’d be lying if I said that I didn’t feel a humbling sense of responsibility to get this one right. The late Dwayne McDuffie still stands as a titan in this industry – and while I’m not so presumptuous as to think I can write Static as well as he did, I’m hoping I can write a Static he’d get a chuckle out of.”

This is not the first announcement we will see about changing writers.  Expect more big news to come out this weekend at the New York Comic Con.