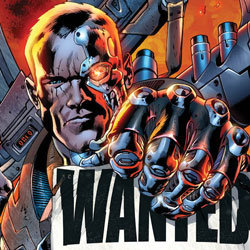 Marvel sent over a comic shop only variant cover for the upcoming Avengers: X-Sanction #1.

AVENGERS: X-SANCTION #1 (OCT110607)
AVENGERS: X-SANCTION #1 COMIC SHOP VARIANT (AUG118129)
Written by JEPH LOEB
Art by ED MCGUINNESS
Variant Covers by BRYAN HITCH & CARLO PAGULAYAN
As all-out war breaks out between Cable and the Avengers, your comic shop will get caught in the crossfire and be immortalized in one of two all new covers! In the Avengers: X-Sanction #1 Wanted Variant by Bryan Hitch, see the bounty on your comic shop with an actual photograph of your store right on the cover! Then, in the Avengers: X-Sanction #1 Battle Variant by Carlo Pagulayan, Captain America goes toe to toe with Cable defending your favorite comic shop, complete with store name and logo prominently featured! Leading into the biggest event in Marvel history, Cable has just 24 hours to destroy the Avengers to save the future and the battle is being brought to YOUR front yards!