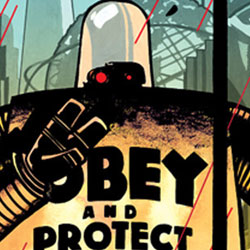 Terminal City is a place where transistor-tube robots rub elbows with old-time gangsters, where bright, shiny technologies cast deep noir shadows. The city has been in decline since a group of celebrated adventurers—Kid Gloves, the boxer; Monty Vickers, the explorer; Eno Orez, the man of 1,000 faces, and Cosmo Quinn, the human fly—were each disgraced or disappeared into obscurity. Now a series of mysteries involving an unopenable briefcase, a missing link in evolution, a daring lady in red, and an obscene skywriter brings the four men together once again—some on the side of the law, some involved in shady business—with explosive results!

“This is one of the best marriages of story and art I’ve seen in years and an absolute delight to read.”—Alex Ross, artist of Marvels and Kingdom Come