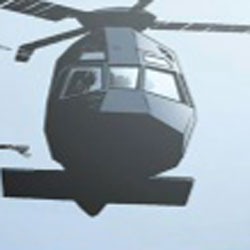 “We thought the graphic novel just might be the best early venue to keep young people’s attention focused on this outstanding mission,” said Dye. “Julia and I wanted to find a way to shine some well-deserved light on the men and women in both the intelligence and special operations communities that worked so hard to make it happen.”

This historic tribute details the bravery and valor of SEAL Team 6 as it descends into Abbottabad, Pakistan and achieves the near impossible. Joining the Dyes to bring this incredible graphic novel to life are artists Gerry Kissell (The A-Team: War Stories, Iron Sky) and Amin Amat (Buckaroo Banzai, Iron Sky). John M. Del Vecchio, decorated Vietnam veteran and best-selling author of the The 13th Valley, also provides afterword material. A portion of the proceeds from CODE WORD: GERONIMO will be donated to the American Veterans Center, a charity supporting military veterans.

“I couldn’t be more ecstatic to have Code Word: Geronimo out to stores and in readers’ hands,” said editor Tom Waltz. “It’s been an incredible journey with this graphic novel — from its initial conception to its release — and I’ve been proud to be a part of the process every step of the way, to include the opportunity now to share it with the rest of the world. I truly believe this is a special book.”

Following an exceptional career in the United States Marine Corps, Captain Dye is now best known as the military advisor to Hollywood for his work on over seventy films, from Platoon to Saving Private Ryan, and Band Of Brothers to The Pacific. Captain Dye is also the acclaimed author of many novels, including Outrage and Laos File. Find out more at www.CodeWordGeronimo.com.

About Charlie Foxtrot Entertainment
Charlie Foxtrot Entertainment, LLC (CFE) is a military-based entertainment company that is “inspired by heroes.” It is engaged in the business of financing, producing and licensing, movies, documentaries, books, graphic novels, video games, music and merchandise–from its library of currently owned, and to-be-acquired, military oriented intellectual properties. CFE’s best-selling books and critically-acclaimed graphic novels provide a base for the development of its film and TV productions. The company takes great pride in the fact that all of its members are veterans of the U.S military—this provides CFE with a unique and authentic insight few others can achieve. More information about the company and its principals can be found at www.charliefoxtrotfilms.com.
via IDW Publishing