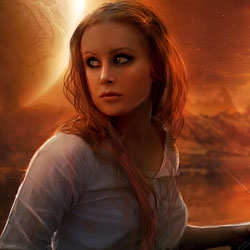 Dynamite is proud to announce that we have reached an agreement with Amanda Hocking and will publish Hollowland comic books in 2012!

Amanda Hocking is an American writer of paranormal romance young-adult fiction. Hocking lives in Austin, Minnesota. Employed as an assisted living worker until 2010, she wrote 17 novels in her spare time.  In April 2010, she began self-publishing them as e-books. By March 2011, she had sold over a million copies of nine books and earned two million dollars from sales, something previously unheard of for self-published authors. To date only five other authors have sold over a million digital e-books.  In early 2011, Hocking averaged 9,000 book sales each day. In Hollowland, Nineteen-year-old Remy King is on a mission to get across the wasteland left of America, and nothing will stand in her way – not violent marauders, a spoiled rock star, or an army of flesh-eating zombies.

“It’s always been a dream of mine to bring the world of The Hollows to graphic novels,” says acclaimed author Amanda Hocking.  “I’m so fortunate to be able to partner with an amazing publisher like Dynamite to bring this dream to life.”

“It is such a pleasure for Dynamite to be working with Amanda as she knows the world of comics,” says Dynamite President and Publisher Nick Barrucci.  “Amanda’s success shows that hard work and passion pays off and we can’t wait to see her incredible energy translated to comics!” Here’s what people are saying about Hollowland:

“Anyone who has any interest at all in reading a well-told story needs to read this. It’s fantastic, horrific, and strangely beautiful.” – Robert Duperre, author of The Fall

“The action is non-stop. It starts on the first page and really doesn’t let up at all, but not to the point where you get burnt out on it. And FINALLY we have a female lead that can do things for herself! Remy is strong and courageous and does things her way to survive. There is some romance, but it’s not like all the other romances in supernatural stories where the girl ends up not being able to do anything alone. It was SO refreshing.” – Jessica at The Firefly Book Loft DYNAMITE is consistently ranked in the upper tiers of comic book publishers and several of their titles – including Alex Ross and Jim Krueger’s PROJECT SUPERPOWERS – have debuted in the Top Ten lists produced by Diamond Comics Distributors. Several of their titles have also hit The New York Times Best-Sellers list: The Boys, Vampirella Archives, Robert Jordan’s New Spring and Wheel of Time graphic novels.  In 2005 Diamond awarded the company a GEM award for Best New Publisher and another GEM in 2006 for Comics Publisher of the Year (under 5%). The company has also been nominated for several industry awards, including the prestigious Eisner Award.