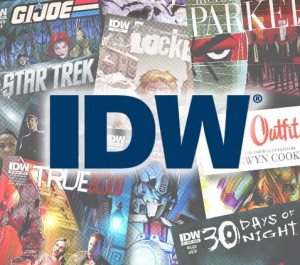 DIGITAL COMICS: IDW brings it all to ComiXology

ComiXology and IDW Publishing today announced a new partnership to bring the complete IDW library to comiXology customers. Through this strategic undertaking, comics fans everywhere will now be able to experience every IDW digital comic across all comiXology’s platforms — iOS, Android and the Web!

“It’s personally very exciting to have IDW join the comiXology platform whole-heartedly,” said David Steinberger, CEO of comiXology. “As one of the largest and most esteemed comic publishers in the industry, IDW has an incredible range of content. From G.I. JOE to TRANSFORMERS to THE HUNTER and LOCKE & KEY, their content looks great on comiXology.”

Starting today, the entire TRANSFORMERS comic line will be available immediately on all comiXology platforms and will range in price from $.99 to $1.99. All TRANSFORMERS comics previously sold only through comiXology’s Android or online store will sync across all devices and platforms supported by comiXology. Additionally, several new titles will also be available starting today, including the first issue from IDW’s new STAR TREK ongoing series, and issues from the company’s G.I. JOE, LOCKE & KEY and TRUE BLOOD series.

“ComiXology customers have asked for IDW to be part of the Comics by comiXology lineup for some time, and we’re thrilled to bring our catalog to those readers,” stated Jeff Webber, IDW’s Director of ePublishing. “We’ve always been impressed with comiXology’s strength in offering comics across multiple platforms, including Apple iOS, Android and the Web. David and his team have put together an awesome offering. ComiXology has established a huge audience — I know we’re going to make a lot of IDW fans happy this week.”

All comiXology platforms feature the company’s Guided View™ Technology, enabling the reader to transition smoothly between different comic panels, mimicking the reading experience of a traditional print comic book. All purchases of IDW comics through the Comics by comiXology App whether on Apple® iOS devices or Android sync to all devices and the web at comics.comixology.com.

The complete list of comics coming to the Comics by comiXology app are below:

About comiXology
Since 2007 comiXology has been developing the technological infrastructure to bring comics into the digital mainstream and expose new audiences to the rich history and culture of the industry. Through partnerships with top comic book publishers including Marvel Comics, DC Comics, IDW Publishing, Archaia Entertainment, BOOM! Studios, Dynamite Entertainment and Image Comics as well as their own mobile and web apps which hosts over 14,000 digital titles, comiXology has become a leader in digital comic book proliferation. Also focused on creating strong ties with retail stores through its technology solutions, comiXology continues to transform the previously fragmented comic ecosystem into a vibrant and cohesive marketplace.