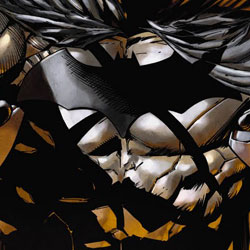 The Joker escaped? A child kidnapped? Bruce Wayne getting it on? This issue is going to give you a splitting head-ache. Previously in Detective Comics: It’s a whole new world for DC readers, which means it is time to switch things up and shake the foundation of the Batman Universe to its core… except it didn’t. What readers did get was the Joker being sent to Arkham Asylum and getting his face cut off.

LEAVING YOU IN STITCHES

When a big bad villain escapes from the insane asylum, only leaving behind his face, you’d think Batman would be all over the case, not gallivanting around as Bruce Wayne, having business meetings while climbing a rock wall, and getting it on with newspaper reporters we haven’t seen before. It’s a bit of storytelling that really draws the reader away from last issue’s cliffhanger, and it rather annoying. That being said, a good writer will never introduce characters and situations if they won’t play a role later, and I have a feeling the sexy reporter, and the owner of Mecha-North Corp will play a bigger role in the near future.

When it does come to the actual detective work (this book IS called Detective Comics), Batman seems to stumble, not really following clues so much as reacting to the information presented to him. It kind of feels like the writer is handing the information to characters simply so they can move to the next big fight scene. That scene occurs when the police are tipped to the location of killer Ray Quimby, only for Batman to realize too late that the killer’s death is a trap, and a family of Leatherfaces have taken up residence in Gotham and have captured the city’s champion.

There are a few problems with the way the story progresses in this closing scene. First Batman is taken down, but not out, and the time between Gordon’s capture and the reveal that his face has been hacked, slashed and sewn don’t line up at all. Of course readers are expecting to believe that this crazed family who we have never heard of has the ability and means to do facial surgery in a matter of moments.

I’m left rather wanting after reading this issue. While Daniel impressed and shocked me with the first issue, this installment comes off as a one up, with a villain that fits in the same category as Professor Pyg, and neither of them are on my Most Interesting New Villains list.

While Daniel’s story is beginning to sour with me, I still enjoy his art. Yes, there are times when he adds more lines simply to give the illusion of extreme emotion, and the colorists have given everyone a bad case of rosacea, but I like how the action is easy to follow in scenes where lots of bodies are moving around. The color palette this time around tends to lean towards browns, with a hint of blue and green thrown in, which probably means something, but not something that I feel needs a lot of attention. Now that I say that, I’m sure the colors used in each issue will build to something important by the end of the arc.

BOTTOM LINE: IT’S BATMAN, OF COURSE I’M GOING TO BUY IT, BUT THAT DOESN’T MEAN YOU HAVE TO

Yup, I’ll admit it – I’m a Batman fanatic, and will generally buy anything featuring DC’s biggest moneymaker. But that doesn’t mean this issue is something everyone is going to like. Following the big opening chapter, I was expecting the energy and excitement to continue non-stop, but sadly this was not the case. The introduction of extreme villains for the shock value, story elements that seem completely out of place, and little to know actual detective work for the world’s smartest man end up earning Detective Comics #2 a middle of the road 2.5 Stars out of 5.