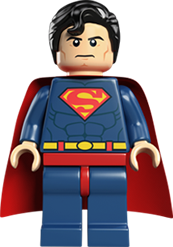 NYCC’11: LEGO to give away exclusive DC Universe Superman Minifig LEGO contacted us to let us know that attendees to the New York Comic Con will have a chance to get a limited run of the Superman Minifigure that will released as part of the upcoming LEGO DC Universe.

Also, if you happen to be at the show, be on the lookout for the LEGO Batcave that will be shown for the first time.