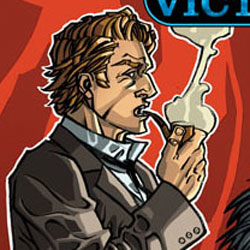 You can’t keep these two extraordinary gentlemen down for too long! Starting in December, Bluewater Comics is bringing these two Victorian-era heroes back in two four issue limited series. Compared to the heroes of today aided with high tech computers, weaponry and all kinds of smart gadgets, Sherlock Holmes and Allan Quatermain fought evil only armed with their wits and an incredible aim.

“Sherlock” #1, which is written by Ken Janssens with pencils and cover by Matt Marting, pits Arthur Conan Doyle’s hero trying to solve a murder while dealing with a haunted hoarding house.

“Throughout my life, I have been creating characters that have been influenced by Sherlock Holmes,” said Janssens. “To actually write the main man, however, was a bit daunting but very much an honor.”

Marting said as he drew Holmes and his partner-in-crime-solving, Dr. John Watson, he wanted to keep with the classic, but add his own touch to the characters. “Reimagining such an established and beloved character as Sherlock Holmes was a massively exciting, but slightly nerve wracking, opportunity,” said Marting. “Working with a character that means so much to so many people brings a lot of expectation but I’m hoping it’s led me to raise my game.”

“Quatermain” #1 tells how the Allan Quatermain, created by H. Rider Haggard, treks across East Africa where he runs afoul of the warlord Bwana Nzige, Lord of the Locusts. He rules a kingdom built on blood and ivory and Quatermain finds himself the prey as he is hunted by Nzige’s chief assassin, the fearsome sorcerer, Lokongoi.

“At the turn of the 20th century, Allan Quatermain was arguably the English-speaking world’s greatest fictional hero, and his creator, H. Rider Haggard, was regarded as the king of romantic adventure fiction,” said writers Clay and Susan Griffith. “As longtime fans of the Quatermain stories, our goal with this comic series was, first and foremost, to pay tribute to Haggard’s classic character and his thrilling adventures.”

With the art and cover by Patricio Carbajal, Bluewater Comics president Darren Davis said fans who love Holmes and Quartermain will find a new home with these two mini-series.

“I loved reading about characters like Sherlock Holmes and Allan Quartermain when I was growing up,” said Davis. “They had a way of walking into the room and taking command and saving the day and we are excited to share these stories.” Davis said credit for the series goes to the creators. “I have been pleased with the work Ken and Matt put into ‘Sherlock’ and I thought the Griffiths wrote a fun tale and readers will love both stories.”

To find a comic book store near you go to www.Comicshoplocator.com.

Besides making a name in comic books, Bluewater offers workshops for schools and libraries to help make reading fun for younger readers. Bluewater strives to make to do this with their bio-comic titles “Female Force,” “Political Power,” “Fame,” “Infamous” and “Faith Series” as well as working with icons of the literary world such as S.E. Hinton and John Saul.

Bluewater’s comic books have been featured on CNN, The Today Show, BET, Fox News and in “People” Magazine as well as thousands of other places.
Bluewater aims to unite cutting-edge art and engaging stories produced by its stable of the publishing industry’s top artists and writers. For more information, visit www.bluewaterprod.com.