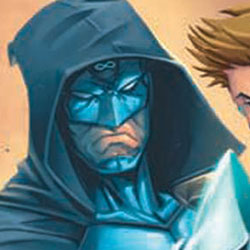 Across all realities, the Eternal Champion makes his way to the American South — hoping to find the key to what has thrown the Balance off so chaotically. Elric, Hawkmoon and Corum face daunting trials along their journey, encountering creatures and foes from their storied past. All the while, Eric Beck makes his way toward his sword…and his destiny! Join legendary fantasy author Michael Moorcock and New York Times bestseller Chris Roberson (SUPERMAN, iZOMBIE, STAN LEE’S STARBORN) as they team up to bring the Pale Prince back to comics like you’ve never seen him before! Neil Gaiman called Moorcock “my model for what a writer was” while Warren Ellis said he is one of the “eight core sites in my creative genome.” Now witness the next chapter in Elric’s newest adventure!

It’s the beginning of the crossover 20 years in the making! Launchpad is the CEO of a major corporation in St. Canard? The Gizmoduck suit has been taken over by a little girl? Has the entire world gone mad? It certainly has, according to Scrooge McDuck, and he’s about to get to the bottom of it in Part One of the biggest event in Disney Afternoon Revolution history…The DARKWING DUCK/DUCKTALES crossover: Dangerous Currency! Brought to you by EPIC MICKEY’s Warren Spector!

In the aftermath of a deadly battle on a rural Nebraskan farm, Kirsty reunites with an old friend, a hidden Harrower, and contemplates a literal deal with the Devil. The Hellraiser saga is heading to a change you will not see coming! This is something that can only come from the mind of horror icon Clive Barker!

This is the issue that IRREDEEMABLE fans have been waiting for since the very beginning. Where did the Plutonian truly come from, and where is his real home? Do his parents hold the key to stopping his mission of revenge on the world that turned their back on him? You can’t miss this epic issue of Mark Waid’s multiple Eisner and Harvey Award-nominated superhero series!

STAN LEE’S STARBORN continues to be NOT OF THIS WORLD! With the epic crossover that fans have been clamoring for in full swing, Starborn, Soldier Zero, and The Traveler fight villainous forces on opposite fronts, working together to save the planet. SUPERMAN’s Chris Roberson and SPIDER-MAN’s Khary Randolph bring you an explosive Stan Lee superhero issue that will change the universe as we know it!

Your favorite furry flatfoots are back in another epic piece of the Disney Afternoon Revolution! Join DARKWING DUCK writer Ian Brill and MARVEL SUPER HERO SQUAD artist Leonel Castellani as they take the diminutive detectives on an all new adventure! Who or what are the Danger Rangers? It’s up to Chip, Dale, Gadget, Zipper and Monterey Jack to find out before the Danger Rangers find them! Read what happens in the fan-favorite storyline “Slippin’ Through the Cracks.” This is the book that will have you singing that theme song you can never forget: “Sometimes some crimes go slipping through the cracks. But these two gumshoes are picking up the slack. There’s no case too big, no case too small, when you need help just call—Ch-Ch-Ch-Chip ‘N’ Dale Rescue Rangers!” One of the final trades from the KABOOM!/Disney relationship. Will be printed to order, so make sure you pre-order your copy today!

The terrifying conclusion to the critically acclaimed series from comics legend Kurt Busiek! After a powerful, predatory corporation acquires Dracula as a valuable asset, they soon discover one terrifying truth: no one can own the Son of the Dragon! As the vampire armies of the corporation and Dracula face off against each other, our hero Evan must enter into an unlikely alliance with Marta and her team of vampire hunters. As Dracula and the corporation’s fight reaches a fever pitch, can Evan and Marta work together long enough to rally a rebellion that will be able to withstand the onslaught? It’s bloodsuckers vs. bloodsucker, as Busiek brings an incredibly modern spin to the Dracula mythos with award-winning author Daryl Gregrory (PANDEMONIUM, PLANET OF THE APES) and rising star artists Scott Godlewski (CODEBREAKERS) and Damian Couceiro (NOLA).

STAN’S BACK! Now in trade paperback! Stan Lee, the most colossal force in the history of comics, teams up with critically acclaimed writers Dan Abnett and Andy Lanning (THE LEGION, IRON MAN/THOR) and artist Javier Pina (SUPERMAN, BATMAN) for the dramatic, action-packed superhero scorcher, SOLDIER ZERO! Half-Human. Half-Alien. All Weapon…and all in this brand new collection! Compiling the highly celebrated debut story arc by hot writing team Abnett and Lanning, find out the secret behind Soldier Zero’s flight to Earth and why Stewart Trautmann has become an intergalactic weapon of war. This can’t-miss edition features a cover by fan-favorite X-MEN artist, Trevor Hairsine!

Now in trade paperback! Charles Schulz’s world-renowned comic strip, PEANUTS, takes the stage as a graphic novel! Adapted from the animated special, Happiness is a Warm Blanket, Charlie Brown, this timeless retelling takes us back to the neighborhood and features Linus’ insecurities, Charlie Brown’s kite-flying woes, Lucy’s unrequited love for Schroeder, and everyone’s favorite beagle, Snoopy, in a lively and colorful spin through Charles Schulz’s imagination. HAPPINESS IS A WARM BLANKET, CHARLIE BROWN is certain to please old and new fans alike!