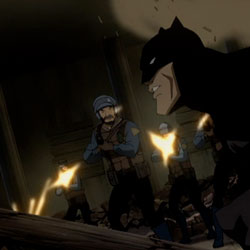 Warner Home Video sent Major Spoilers a sneak peek at Batman: Year One that arrives in stores on October 18, 2011.  If you liked Batman interrupting a dinner party, check out Batman have a friendly exchange… Batman: Year One is based on the landmark 1987 DC Comics titles from 12-time Eisner Award winner Frank Miller and illustrator David Mazzucchelli. The film depicts young Bruce Wayne’s return to Gotham City in his first attempts to fight injustice as a costumed vigilante. The playboy billionaire chooses the guise of a giant bat to combat crime, creates an early bond with a young Lieutenant James Gordon (who is already battling corruption from inside the police department), inadvertently plays a role in the birth of Catwoman, and helps to bring down a crooked political system that infests Gotham.