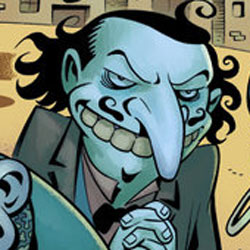 “Just the place for a Snarked!” the reviewer cried,
As he handled his book with care;
Supporting each page with a grip on each side
And a finger entwined in his hair. Previously, in Snarked!: In August, Snarked #0 came out which was a $1 prologue to this ongoing. It introduced us to the characters of the Walrus—a smooth talking con-man—and his partner in mischief, the Carpenter (Clyde McDunk). The book detailed their attempt to steal a considerable amount of food from the castle by persuading Princess Scarlett and Prince Rusty they were Snark inspectors, and also established the general world of Snarked through sketch galleries, a diary entry and other miscellaneous documents.

If—and the thing is wildly possible—the charge of writing nonsense were every brought against the author of this brief but instructive review, it would be based, I feel convinced, on the fact that I’m borrowing lines from Lewis Carroll’s works wholesale. I do this not in an attempt at plagiarism (in fact, I’m citing it right here—anything that is remotely well-written in this review is entirely probable to be cobbled together or taken outright from The Hunting of the Snark by one Charles Lutwidge Dodgson, known to the literary world as Lewis Carroll), but as a way of emulating the brilliant way in which Roger Langridge has incorporated Carroll’s work into this book. The title page of the issue (titled Fit the First: Forks and Hope, which is actually a line from Fit the Third that is repeated in each following Fit) holds a clever poem by Langridge which is written with some brilliant lines that I feel Lewis Carroll would’ve been proud of; the best stanza being:

“The fortunes of the Kingdom
Lately took a downward turn;
The people found a living
Somewhat difficult to earn.
But that was not a problem
For the Walrus and his friend,
So used to earning nothing
(Guess it paid off in the end)!”

I have been a huge fan of Carroll’s Alice books since my early youth, and after rereading them my Freshman year of high school I fell in love with them again. I memorized Jabberwocky (and endlessly recited it to my friends, to whom the novelty very quickly wore off), and after I’d exhausted the beautiful logic of the Humpty-Dumpty chapter of Through the Looking Glass, I had to find more of Carroll’s brilliance. I turned to The Hunting of the Snark, which I highly recommend everyone read. It’s available for free through Project Gutenberg, since its copyright has passed; you can view it here: http://www.gutenberg.org/files/13/13-h/13-h.htm

Langridge’s Snarked incorporates elements of the Alice books (the characters of the Walrus and the Carpenter, plus others) along with aspects of and snippets from The Hunting of the Snark. The princess reads the last seven stanzas of the poem to prince Rusty, which serve as a beautifully illustrated explanation of the general concept of Snarks and Snark hunting. Snarks take the backseat for a bit after this, as we’re treated to some fairly predictable but by no means unenjoyable court intrigue, as King Russell the Third has been on his sea voyage twice as long as expected, and three aspiring regents conspire to take executive power over the throne by naming Russell the Fourth (prince Rusty) the acting monarch.

FIT THE SECOND: CHARMING, WITH SMILES AND SOAP

I’m going to try not to get on a soapbox too much here, but anyone who’s been upset with DC’s recent portrayal of female characters really ought to read Snarked. Princess Scarlett is a confident and powerful protagonist who is a grand total of eight years old. She doesn’t let herself get pushed around, and insists that SHE be crowned monarch rather than Rusty, as she knows the kingdom’s constitution well enough that she is the rightful heir, considering Rusty is too young (which is what the co-conspirators were banking on). The rest of the story is cute, but rather than summarize I’ll let you read it for yourself; there are appearances by the Cheshire cat and our beloved duo the Walrus and the Carpenter (who I tended to read with Pinky and the Brain voices), and the book ends leaving me really wanting to read the next issue.

The art in this book is delightful; the characters are simple and effective, and while clearly designed to appeal to a younger audience are still enjoyable for anyone. Langridge does a great job of filling a panel, generally having characters still in action while in the background of a panel—indicative that the artist really put a lot of care into each page. The only major problem I had with this entire book was the design of the Cheshire cat, whose face reminded me of a mixture of Felix the cat and Mooch from the comic strip Mutts, while the body is clearly similar to Garfield. These two don’t mix well in my mind, and are markedly different from the stereotypical portrayals of the character. Some of the coloring also seems a bit washed out, particularly in the faces of characters, but that may just be my copy.

FIT THE THIRD: BUY FORTY-TWO COPIES, ALL CAREFULLY BAGGED, WITH YOUR NAME PAINTED CLEARLY ON EACH

Despite Boom! Studios sending us review copies, I have Snarked on my pull list each week because this is a title that I want to ensure continues. The price tag is a little steep in my mind—$3.99 for 24 pages—but it is absolutely worth every penny. This is a book I’ll be holding on to so that some day I’ll be able to read it with my children. I’m giving Snarked a full five out of five stars, and eagerly anticipating more Lewis Carroll-y goodness.