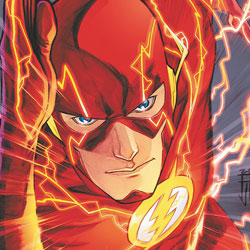 Our month long coverage of the New DCU wraps up today with a look at the character who got everyone into this mess in the first place. Previously in The Flash: One day, young Barry Allen was reading one of his favorite Golden Age comic books featuring Jay Garrick, the Flash. Then amazingly, a rack of chemicals was struck by lightning, and soaked Barry Allen giving him the same speed powers that he had read about in the funny papers. He became The Flash! Then, by coincidence, fate, or a different version of himself traveling through the Speed Force, his nephew, Wally West was caught up in the same accident and he became The Flash, too. Then Jay Garrick and Barry Allen crossed into each other’s plane of existence and the multiverse was born.

Then it all went to hell. Barry had to sacrifice himself to save all of creation, leaving it up to Wally (and Jay Garrick, Bart Allen, Jesse Quick, Johnny Quick, and a plethora of other speedsters) to carry on his long proud tradition. Then someone thought it would be a good idea to bring Barry Allen back from beyond the beyond, and it all went to hell again.

This is the aftermath.

BARRY ALLEN USHERS IN A NEW AGE OF COMICS

When it became clear that the Wally West we knew was not coming back as The Flash, it gave creators a chance to try something all new, all different with the character that ushered in the Silver Age of comics. One would assume that Barry’s origin story has remained relatively intact, but everything else you knew about the character some refer to as “Saint Barry” has been thrown out the window.

For example, did you know he and Iris West were no longer married? In fact, in the New DCU, Barry and Iris aren’t even dating. Yes, Iris is still a reporter, and Barry is still a police scientist, but this time around, Barry is dating Patty Spivot, a fellow C.S.I. for the Central City Police Department. I know some people are upset that Iris and Barry aren’t married/dating in this new universe, but that is okay; there are plenty of people who weren’t even around when Barry sacrificed himself to the Speed Force some thirty years ago (give or take), so a dissolved marriage shouldn’t be that big of a deal. Without that baggage, Barry is free to do what ever he wants, with (presumably) anyone he wants, but that doesn’t mean Iris isn’t going to show up. And I really like how Manapul and Buccellato introduce Iris. She takes a very in your face approach to getting her news stories, and if I’m not mistaken, appears to have something for the young (de-aged, retconned, relaunched – FLASHPOINT!) Barry Allen. If the plans are for the two of them to eventually get back together, I’m liking how they are setting the stage right now.

The other thing you may not be aware of is that Barry had a really good friend in college who was always getting them in trouble, often forcing the two to flee a beating. We only learn about this because the Flash broke up a robbery, and his good friend from college was one of the burglars… or should I say one of the 57 clones who attempted to burgle a big posh science function Barry and Patty were attending. That’s the big cliffhanger/story for this book – who is doing the cloning? Why this friend from Barry’s past? And why does Iris look so good in a sweater?

I’ll admit, I wasn’t thrilled when Barry returned to his running ways. I barely read Flashpoint (Mystery Woman – page 12, panel 5), and I really wasn’t looking forward to a Geoff Johns love song to That One Guy that was forced on a writer or team. But Manapul and Buccellato have surprised me. The book I waited until the very end to read, I actually enjoyed. Sure the clone plot is a bit long in the tooth, but everything else flowed naturally. The character moments highlighted the strengths of each character we have been introduced to, and I think new readers aren’t going to have any problems jumping on board this book.

WE KNOW WHY IRIS LOOKS GOOD IN A SWEATER

Francis Manapul. I’ve said it before – when you can make each character look unique, and I can spot that character in a crowd regardless if they are wearing their superhero costume or not, then someone is doing a good job. Francis Manapul does a great job.

BOTTOM LINE: I’M PICKING THIS ONE UP, YOU SHOULD, TOO

I thought The Flash was going to be one of the continuity baggage titles for the DCU. Glad I was wrong. While this isn’t the Silver Age Flash, or the Wally West Flash, or even the shudder inducing Bart Allen aged Flash, Barry Allen is a new Flash for a new time, and I hope that the character can remain fresh and interesting for a long time to come. Barry still comes off as a little too goody-goody, but the story is paced well, the characters are interesting, and this book is one worth picking up. Flash #1 is a good way to end the first month of new number ones from DC Comics, earning 4 out of 5 Stars.