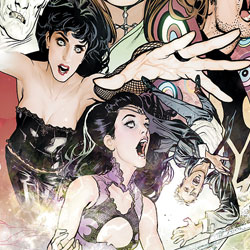 Shade the Changing Man, fresh off his Secret Seven appearance in Flashpoint, gets called away from his magical blow-up doll to put together yet another rag-tag team of supernatural superheroes, this time to stop a particularly creepy looking and emaciated Enchantress. Previously in… Oh wait, this is a completely new title! Shade the Changing Man is the possessor of the magical M-Vest, which is a magical artifact I am not overly familiar with. So far its purpose seems to be for networking between members of his team; he used it to summon members of the Secret Seven during Flashpoint, and Madame Xanadu uses it to summon Shade here. Other than that, we see Zatanna, John Constantine and a few members of the Justice League.

The opening of the issue gives us the cast in a clever way; Madame Xanadu’s tarot cards portray the team in their various roles–Zatanna of course being the Magician, June Moone being the Fool, John Constantine in an unspecified role, Deadman being Death, etc.

June Moone, the mortal part of Enchantress, encounters a large demonic being of some sort, then goes into a diner where everyone is watching a news report–and as a child points out, June is the one on TV! Apparently a large number of June Moone body doubles are appearing in the city, and in a graphic but exquisitely drawn two page splash panel they are getting mown down on the freeway. It isn’t often that we get what I consider to be really effective splash panels, but Mikel Janin packs enough into this, and it does a great job of setting the bizarre tone for the rest of the book.

I don’t much care for Shade, partially due to a lack of familiarity with him, but mostly because Secret Seven was such a convoluted and awful Flashpoint tie-in. Plus, his jacket is inferior to Leo Quintum’s in All-Star Superman. Nonetheless, I like most of the other members of this team; Xanadu caught my attention in Demon Knights (which, assuming the presence of Etrigan in the last page indicates his presence in this title–in fact, Jason Blood may have been on one of the tarot cards, now that I think of it–will be interesting to see whether Cornell and Milligan tie the two titles together), and I have always been a big fan of Zatanna, even if she is inexplicably wearing her fishnets on her arms now.

The art in this issue is really good; Janin’s name hasn’t been on my radar before, and I don’t know what else he’s done, but based on this issue I will have to give whatever else he does a try. I am a bit bummed out by the Zatanna redesign. Her old tux and tails costume was perfect, and befitting a stage magician. It was also very tasteful and decently conservative (fishnets aside). Her new costume is nice, though it shows more cleavage while covering her legs, but it doesn’t really distinguish her from other characters–her tux and fishnets were iconic, and I am disappointed DC would get rid of it.

A notable portion of this book is the appearance of the modern day Justice League; Cyborg, Wonder Woman and Superman go to investigate the source of the magical disturbances: a house where Enchantress has secluded herself in a small envelope. This scene has the only weak part of the book in my mind, as the JL discusses how they don’t like magic, and Wonder Woman comments that considering their absurd power levels and penchant for breaking physical laws, they might well be considered magic themselves. Cyborg responds that that certainly doesn’t apply to him, considering he is “an honest-to-goodness product of science and technology.” The exchange feels forced and corny, and I am not sure if Milligan is trying to make some sort of overarching meta-statement about superheroes or trying to explain something to new readers, but either way it fell flat for me. Enchantress attacking the Justice League has some delightfully twisted art, and was reminiscent a bit of Sandman.

Overall the story seems to be going somewhere interesting, and the last page serves as a bit of a shocker, where Madame Xanadu’s years of seeing a non-linear timestream have left her a bit rattled, and we see things from her point of view. Janin’s art is absolutely gorgeous; DC really has it together with their art in this relaunch. From Manapul’s Flash to Lopresti’s JLI, Asrar’s Supergirl and Basri’s Voodoo, there is a very diverse range of artistic styles (Liefeld’s Hawk and Dove, anyone?), with MOST of it being really good. I give Justice League Dark four out of five stars; the story is probably closer to a 3.5, but the art really pushes it up a few notches.