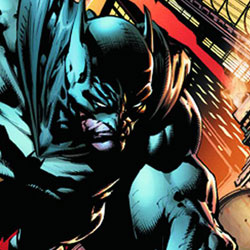 Fear is a cannibal that feeds upon itself. For DC Comics, that fear is the success or failure of the big relaunch we’ve been covering for the last month or so. Batman faces his fears, and Two-Face in Batman: The Dark Knight #1. Previously in Batman: Batman fights crime and puts the criminally insane in Arkham Asylum. He doesn’t believe in killing, but believes the justice system will rehabilitate the wrongdoer. But for whatever reason (whim of the writer), the criminals always escape, and the dance begins again…

There are two story elements that happen in this issue that will no doubt set the stage for the remainder of the arc. The first has to do with Bruce Wayne and his announcement that he funds Batman, Inc. What, you don’t remember Batman, Incorporated? See, there was this big Grant Morrison twist that occurred a year ago where Bruce Wayne announced that Wayne Enterprises had been funding Batman for years, and in order to bring the fight to the streets following Bruce Wayne’s return from the dead (don’t ask), planned on funding other Batman operatives around the world. This certainly explains why the Batwing series is around in this relaunch, and it also proves that certain popular characters (like Batman) didn’t get much of a change during this renumbering scheme.

Of course admitting your are funding a vigilante is going to get some people interested in asking you questions, and the Internal Affairs officers of the Gotham City Police Department think that muckity-muck inside the force is aiding Batman, Inc. The big confrontation occurs during one of Bruce Wayne’s many fund raising charities – it seems every issue featuring Batman this last month has Bruce committing huge sums of money. Fortunately, the very attractive host puts a stop to the police questioning, and in the process catches the eye of Wayne, flirting all the way. It’s a pretty good trick to introduce the love interest, but seeing how Morrison used the gimmick to introduce the big bad during his run, I get the feeling we’re seeing a rerun of plot devices.
And speaking of regurgitating plot elements…

Criminals are escaping from Arkham Asylum. Police are dying left and right. When Batman arrives and enters the asylum, he discovers the breakout was staged to draw attention away from Harvey Dent, who has undergone a huge change. Word of warning kids – Keep of the Steroids. With his second appearance in the DCnU, Harvey Dent has gone from split personality whack job to an opponent who looks more like The Hulk than a lawyer who got a face full of acid.

I’ve been pretty happy with all the Batman books that have been released to date, but this time, I’m left feeling wanting. For a brand new reader there are certainly elements that will keep the reader coming back, but there are also elements that are going to cause some readers to need to dive into the back issue bin (or the digital back issue releases) to get the complete picture. It’s pretty easy to look at a book from a fresh perspective, but this time even that view is skewed.

AT LEAST THE ART IS NICE

I really like David Finch’s art, though I’m not a big fan of the boxy looking Batplane that makes its debut in the opening pages (Mystery Woman, Page 14, Panel 1). Finch and inker Richard Friend draw characters with a lot of detail, and though there are not a lot of female characters in the book, they are all very attractive. With creative teams rotating through the new DC books in order to keep releases on schedule, I’m hoping Finch is able to keep up the pace and quality before deadlines get the better of him.

Batman: Dark Knight is one of those books that would work really well as a new Batman title in the old DCU. It’s got a gritty edge to it and encourages Batman’s appearance in as many books as possible. As a new title in the new DCU, this one is going to be an interesting one to watch. It’s got a gritty edge to it, and the issue encourages questions from new readers, but ultimately I think they’ll find those questions were answered over the last couple of years in the old DCU. I’m on board for at least two more issues (partly because of my Batman fanaticism, but also because pre-orders for books releasing in December were do before I read this book), but I feeling hesitant. Batman: The Dark Knight earns 3 out of 5 Stars.