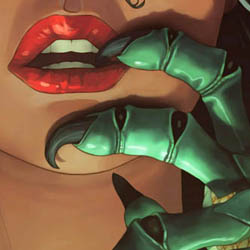 Or – “The Most Unlikely Relaunch Title, Even Moreso Than Grifter…”

I’ll say this for the relaunch:  They certainly seem to be willing to take chances as well as ready to try and bring back all manner of readers with the depth and breadth of their titles.  Most interestingly for me is the fact that there are THREE Wildstorm titles (which is to say, three former 1990’s Image titles) in play out of 52 books.  Stormwatch was mostly okay, Grifter was quite drab, and now we see the former WildCAT called Voodoo take her place in the spotlight…  But will her feature dance please the crowd?

(On an unrelated note: I defy any of you to say “New Fifty-Two Voodoo Review” ten times in a row without smiling.  It’s physically impossible, I tell you!) Previously, in Voodoo:  Priscilla Kitaen was an exotic dancer who always had a weird touch of what Scatman Crothers would call  “The Shining.”  She had strange intuitions and visions, and even kept seeing some people as inhuman monsters.  A chance encounter with a super-team called the WildCATs drew her into a the life of a superhero, and she developed more powers, all seemingly related to an alien race called the Daemonites.  Why would an unassuming young lady like Pris have all this strange abilities?  Why, because she herself has Daemonite heritage, making her an alien/human hybrid and a serious wild card in the world of the super-dupers.  Where will the new 52 find Voodoo?

THE NAKED ELEPHANT IN THE ROOM…

Okay, we’re going to start with full disclosure (you should excuse the expression) and discuss the opening splash page:  Voodoo, on her knees in a rain of bills, working the floor at a strip club.  If you’re already up in arms about the portrayals of women in ‘Red Hood & The Outlaws‘ and ‘Catwoman‘ last week, this is probably not the place to go for redemption.  Two things make this issue feel different (at least for me, your mileage is bound to vary):  First, Voodoo was established as being an exotic dancer in her very first appearances, and second, while the character is overtly sexy in the way she is drawn, she is not interested in banging every man within arms reach.  In fact, as we go through the issue, we find Voodoo to be withdrawn from men, women and children alike, and there is a particularly charming conversation halfway through the issue wherein one of her fellow dancers asks her to babysit as a favor, only to get a puzzling and creepy response.  There’s something OFF about Voodoo, something just not right, and giving the character a super-hot facade helps to make that fundamental imbalance a little more pronounced, amplifying the gap between how she LOOKS and how she acts.

INTERESTING BITS (AND NOT THE NAUGHTY ONES.)

There’s danger afoot, with a couple of mysterious secret agent types watching her dance, and I have to admit I got a little kick out of seeing the female secret agent wipe the floor with several teenaged tough-guy wannabees.  (If you remember the old-school Jim Lee titles, you’ll know why it’s important that the woman’s lighter says “Black Razors.”)  There is a heaping helping of “New DC Moral Ambiguity” at play here as well, as the male agent is perfectly willing to pay Voodoo for a personal dance (which is probably quite illegal) and even threaten her to get what he wants.  The downsides of the issue are that the “what he wants” is a big mystery, and the reveal that Priscilla is a shape-shifting alien thing was somewhat telegraphed by the cover.  Sami Basri does some beautiful work in this issue, the same soft-edged, soft-palette texture work that the artist (I don’t know Sami’s gender) did on Power Girl.  It’s a nice issue to look at, and it’s worth nothing that even when the main character is half-naked, it never feels as skeevy as Starfire’s scenes in Red Hood #1.

THE VERDICT: BETTER THAN NINETY-TWO.

I predict more backlash about the unbalanced female portrayals in the New 52 about this book, but the climax of the issue makes it clear:  This is NOT a female, and not even a human being we’re dealing with, and whatever her motives are, it’s not about jumping former teen sidekicks.  Overall, this is a pleasant surprise of an issue for me, as Ron Marz takes some familiar bits (the tough-girl agent paired with the chauvanist pig agent, the “Species” bit about a monstrous creature passing itself off as an irresistable human) and adds just enough color and character for me to want more.  Basri’s subdued and tasteful art certainly helps in that regard, as this same story drawn by another artist could easily have been vulgar.  (I won’t name names, but a quick scan of comic racks will easily show you what I mean.)  There’s a sense of menace that helps to overcome the vagueness of plot, and Voodoo herself is a confident, if somewhat murderous, character who ends the issue in a position I NEVER expected.  (Minds out of the gutter, folks.)  I was initially wary of what Voodoo #1 would have to offer, but found it to be better than anticipated, earning 3.5 out of 5 stars overall.  I’ve never been a fan of Voodoo or her old teammates, but this one has me sticking around for at least the first arc, which should be testament enough…

Faithful Spoilerite Question Of The Day:  Do you think the proliferation of relaunched Wildstorm books to please the Wildstorm fans, or is it to please Wildstorm owner/DC Executive Poobah Jim Lee?