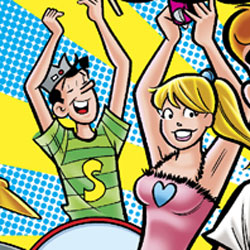 Archie Comics, the leading mass market comic book company in the world and the home to Archie, Betty and Veronica, Jughead, Sabrina the Teenage Witch and Josie and the Pussycats announced today plans for a special, 70th anniversary issue of ARCHIE that will see all profits from sale going to Ronald McDonald House® New York, which provides temporary housing for pediatric cancer patients and their families.

As noted in The Associated Press, Washington Post, Forbes and ABC News, Archie #625 will cap off a year-long celebration of Archie Comics’ 70th anniversary and put a spotlight on a charity that is close to the heart of everyone at the company.

“Over the last few years my wife Penny and I have become very close with the team at Ronald McDonald House New York and familiar with the amazing, personal work they do, day-in and day-out,” said Archie Comics Co-CEO Jon Goldwater. “We here at Archie have always believed in philanthropy and in helping those in need, especially children. The Ronald McDonald House team members are awe-inspiring, and we’re honored to be able to do anything that helps their sterling organization and its families.”

“It’s been an honor and an extreme pleasure to have Archie Comics join our family,” said William T. Sullivan, president & CEO of Ronald McDonald House New York. “Since they’ve adopted our mission to support families battling cancer, their presence has been an inspiration in our Playroom, hallways, and within our hearts.” The special issue, written by noted educator Alex Simmons and veteran Archie artist Dan Parent, reveals that a friend of Archie and the gang has a family member with cancer, and because of treatment, may have to move. The Archies then band together to provide help for their friend and get them a spot at the Ronald McDonald House, so they won’t have to leave Riverdale.

Archie Comics is the leading mass market comic book publisher in the world and the home to a wide array of the most popular humor, action-adventure and superhero characters in entertainment, including Archie, Jughead, Betty and Veronica, Reggie, Kevin Keller, Josie and the Pussycats, Sabrina, the Teenage Witch, the Mighty Crusaders, Super Duck, Lil’ Jinx and many more. Archie Comics have sold almost 2 billion comics worldwide and are published around the world in a number of languages. In addition to comics, Archie characters have been featured prominently in animation, television, film and music in various popular incarnations.

Ronald McDonald House New York provides temporary housing for pediatric cancer patients and their families in a strong, supportive and caring environment which encourages and nurtures the development of child-to-child and parent-to-parent support systems.  Ronald McDonald House New York is the largest facility of its type in the world. The House can accommodate 84 families, and it is filled to capacity almost every night. The House’s location in Manhattan, in close proximity to 13 major cancer treatment centers, draws children and families from across the country and the world, as well as from the metropolitan New York City area.  Since its founding, more than 25,000 families have stayed at Ronald McDonald House New York.  For more information, visit www.rmh-newyork.org.