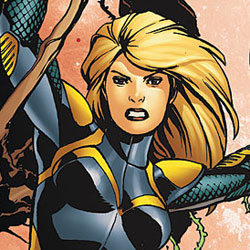 Previously in Birds of Prey: Take a group of very attractive and very lethal ladies with unique skills, set them to work righting wrongs, and there is nothing that can stop them.

Except for a universe relaunch.

IT’S THE SAME, BUT DIFFERENT!

In the waning months of the old DCU, I grew distant from the Birds of Prey, and superhero comics in general. With this all-new all-different universe just waiting for readers to jump back on, The Birds of Prey caught my attention. You see, I really liked the dynamic between Oracle, Black Canary, Lady Blackhawk, and The Huntress, but for whatever reason, that team got mixed and mashed, and thrown in the blender until SOMETHING happened to end it all. Which leads us to this first issue. The Birds of Prey are back, but right now the team consists of two members – one of them is Black Canary.

Charlie Keen is an investigative reporter, and his secret inside source has given him a tip that results in him following wanted murderer Black Canary, and her secret team of evil murdering villainesses (Mystery Woman appears on page 8, panel 2). Because this story is being told with Black Canary’s narration, we know what her powers are, but everything else we thought we knew about the BoP has been turned upside down.

I don’t know what happened at the end of the last Birds of Prey series, or if Black Canary’s murder rap is part of the DCnU that will be revealed in time, but it seemed a little forced in this issue. Of course this is the all new DC, which means there are going to be a number of new faces – including the second current member of the Birds of Prey, Ev Crawford/Starling. She’s an all new character, so less is known about her, and even less is learned about her in this first issue.

And that is pretty much par for the course. A mysterious team of cloaked commandos are trying to kill the Birds, Charlie Keen becomes an explosive key in moving the story forward, and readers learn that a potentially third member of the team will/might be Katana – and in this relaunched universe, she could be anyone.

There is an awkward appearance by Barbara Gordon, but if you are expecting answers to why she is up and walking around in the pages of Batgirl, you aren’t going to get it here. There is an awesome fight scene that takes place in a church, but I think the writer and artist forgot that when a 1940’s Packard meets the brick and mortar of a church, the car isn’t going to come away looking shiny and new. I love how the flashback moments are handled, and I will give Swierczynski credit for writing a story that has a solid foundation that could build into something awesome. But for now, everything seems rather jumbled. If you are trying to attract new readers to the property, confusing plot devices aren’t going to hold their attention for long.

When I first saw Birds of Prey listed as part of the relaunch, I was mildly interested in reading the book. When I took a look at Jesus Saiz’s art, my interest level climbed. Here’s a guy that understands how to draw action – capture the action midway through the move gives the panel a dynamic feel that pops out and grabs your attention. The flashback moments are not only well written, but the transition by Saiz reminds me of the first season or two of Alias, which is pretty cool.

Complimenting Saiz’s drawing is Nei Ruffino’s coloring which adds depth and dimension to the pencils. It’s clear that computer aided coloring is going on, but Ruffino doesn’t go over the top with gimmicky Photoshop filters that some people seem to think are as necessary as breathing or eating. There are some panels that could use some refining with darker shadows, but I’m satisfied enough with what I’ve seen to want to see more.

BOTTOM LINE: MIDDLE OF THE ROAD

My interest in this book varied over the last couple of days. I moved from mildly interested, to very interested, ultimately settling on better than average. Birds of Prey #1 certainly wasn’t the best book of the week, and it certainly wasn’t the worst. There are some interesting character changes that have occurred, and I think once they characters discover the virus/poison component of the mystery the story will kick in, but for now, you’re going to have to take your chances with this one. I’m giving Birds of Prey #1 3.5 out of 5 Stars.