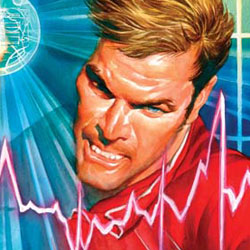 How many issues does it take to turn a man into a cyborg? If you are guessing two, you would be wrong.

Previously in Bionic Man: After being introduced to test pilot Steve Austin, his girlfriend, his friend Oscar, and a mysterious cyborg who is wrecking havoc on OSI bionic research, Austin took to the sky in a new aircraft, only to have it come crashing back to Earth.

Surprisingly, not much Steve Austin action happens this issue. He’s pulled from the wreckage… barely alive, and during the exchange in the operating room, readers get a very good idea of what parts of his body are going to be replaced with bionics.

The story in this installment is really divided into two parts; the first focuses on Oscar and the Office of Scientific Intelligence having an in-depth discussion on what appears to be a past cyborg experiment gone bad – the very same experiment that is breaking into OSI labs, stealing tech and killing anyone and everything. The head of the OSI believes the only way to bring down the rogue agent is to create a new cyborg that is better, stronger, and faster. There doesn’t appear to be a qualified candidate until Oscar learns of Austin’s crash.

The other story being told revolves around the rogue cyborg and his involvement with a Russian company who is also developing cyborg technology. Readers once again get to see the cyborg in action as a ruthless killing machine, but instead of a mindless drone, it looks like this character has a method and a motive for doing everything he does, including building his own cyborg henchmen. It’s a little creepy as Smith and Hester depict the henchmen almost like zombies – strong, cyborg, zombies.

At first I was disappointed we didn’t get to see Steve Austin full of bionics by the end of the issue, but reflecting on what occurred, taking the central character out of the story allows the author and the reader get a better look at the methods and reasoning for moving Austin up the candidate list. This method of storytelling also gives us a look at what is going on in the other camp, and sets up the big conflict that is sure to occur in the third act.

Once again, the art in this issue is solid, it follows the Dynamite Entertainment style we’ve seen in many other books, but ultimately is nothing spectacular. I do like how Jonathan Lau depicted Steve Austin inside the plane as the rescue workers dig him out, but considering the book is rated 16+ I’m surprised things didn’t get bloodier during the cyborg vs. ninja fight in the second half of the issue.

I can understand the need to stretch a story out – you need to have enough material to fill a trade, and in the case of this property, making NBC happy in terms of sales. Smith can be verbose, but allowing more of the universe to be built works in this installment. The art is okay, and if you picked up the first issue, Bionic Man #2 is worth picking up. I still optimistic that this series will satisfy, and for now I’m giving Bionic Man #2 3 out of 5 Stars.