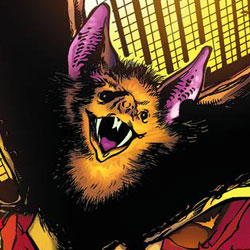 Nightwing has been away for almost a year. Dick Grayson had been a little busy with some other responsibilities. You know, like assuming the mantle of Gotham’s Biggest Badass, The Gosh Darned Batman! Now that he’s back on the scene, we can learn how DC’s relaunch has impacted Bruce Wayne’s first adopted son. How can you find out? Well, besides buying the comic, the next best thing you can do is take the JUMP. Previously in Nightwing: For many years, we knew Dick Grayson as the original Boy Wonder, Robin. For the last year, Dick has fulfilled his long-speculated destiny by becoming Batman. Between these two time periods, Dick adopted the costumed identity of Nightwing. As Nightwing, he led the Teen Titans and appeared in his own ongoing monthly series for nearly 15 years.

Of all the New 52 books released so far, Nightwing carries the most continuity within its pages. As a matter of fact, if this book had been released prior to the relaunch, it would not have seemed at all out of place. The only differences between this iteration of our hero are the costume redesign and the fact that he’s based in Gotham City rather than his traditional Bludhaven. In the previous DC continuity, Bludhaven was pretty much wiped off the map. Whether that is still the case remains to be seen. For now, Grayson has set up camp in a Gotham City loft, ensconced in a much less affluent area of town than Bruce Wayne would traditionally hang his cape.

Nightwing has emerged from his time spent as Batman with a new sense of confidence. As Batman, he had to assume the guise of one of the world’s most formidable heroes. He not only came to terms with his new responsibilities, he flourished by finding a precarious balance between the role of The Dark Knight and his own personality. Grayson enters into skirmishes with the inherent knowledge that he can face anything thrown his way. Although in the last pages of this issue, it appears that he may have been a bit over-confident in his self-assertion. Being attacked by a costumed adversary who manages to break a couple of your ribs can have a cooling effect on one’s self-esteem.

A pleasant side effect of being steeped in familiar continuity is the lack of heavy-handed exposition that many of the relaunch books have suffered under. Other than one line where Nightwing’s internal monologue announces “…I’m finally me again. Dick Grayson – Nightwing!” the overt exposition is minimal, making for a more organic reading experience. I appreciated the fact that I didn’t feel like I was being subjected to a history lesson on a ‘new but very familiar’ version of a character and their place in the world around them.

As it turns out, the circus is in town. It happens to be the same troupe that he and his murdered family belonged to. After some internal capitulation, Grayson decides that he will face his past just as he would face any of his adversaries, by directly confronting it on his terms. He meets up with some old big top colleagues and metaphorically conquers his demons by taking a swing on the high wires. Unfortunately, writer Kyle Higgins gets a bit maudlin by expressly explaining the significance of Grayson’s acceptance of his past. He even stumbles into the realm of the cliché by telling us, “…because at the end of my day, my past isn’t my biggest weakness, it’s my biggest strength – – it’s what makes me who I am. And no matter what Gotham throws at me, that’s something it can never take away.” My blood sugar levels just spiked to over 300.

Thankfully, most of the writing is less overt. Grayson is clearly grateful for all that he has and more importantly, what he’s worked towards achieving in his life. He’s not nearly as morose as his mentor (which isn’t saying a lot), but he also stands out from the majority of the other New 52 restarted characters. While clearly dealing with some dramatic plot developments, the Nightwing book appears to be taking a more well lit path than most of DC’s other titles. As a reader who tends to gravitate towards writers such as Warren Ellis and Alan Moore, to say that this optimistic incantation is appealing speaks to the quality of the storytelling.

One can hardly reference storytelling without commenting on the art from Eddy Barrows. Scenes with Nightwing engaged in heroics contain some stunning penciling prowess. Backgrounds and cityscape contain impressive detail, showcasing Barrows’ obvious artistic aptitude. Panels with less explosive action show less attention to detail, giving the impression that the intricacies of the scenery were of less importance in more mundane scenarios.

BOTTOM LINE: ONE OF THE BETTER NEW 52 BOOKS

This is clearly not a reboot, which for this reader, is a welcome reprieve from the litany of established DC characters that are being dramatically revised. Nightwing was not a broken, so it’s nice to see that properties beyond those contained within the Green Lantern franchise are able to maintain an air of familiarity for established DCU readers. While parts of the inner monologue stumble, some of the conflicts are beyond generic, and the appearance of the Circus is a bit contrived, the overall tone and vision of the book is strong. Nightwing will be a book that remains in my pull list, earning 3.5 out of 5 stars.