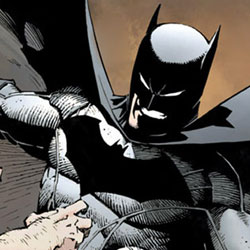 Each and every week since the beginning of DC’s New 52, we’ve been presented with a brand new book featuring Batman. First it was Detective Comics, then Batman and Robin, and now Batman #1. Does this relaunch totally redefine the title and the character, and is this the jumping on point new readers have been waiting for? Previously in Batman: When his parents were killed, young Bruce Wayne began a life long quest to bring justice to the wrongdoers of the world, and make Gotham City – his city – safe for the Everyman. When a bat flew in through an open window, it was a sign that Bruce Wayne should dress like a bat, to scare criminals, who we all know are a superstitious, cowardly lot. He became The Batman!, and over the years fought the good fight. A fight that continues today…

YOU DON’T NEED TO KNOW WHO THEY ARE

It’s been quite a while since a Batman issue really got me excited about what awaited me on the next page, but now DC has two Batman titles that have me loving the books as much as I did when I first started reading comics oh so long ago. It’s one thing to see Batman fighting a horde of escaped Arkham criminals, but it is quite another to see The Joker fighting right alongside the hero to bring order back to the Asylum. It’s all a ruse, of course, as we later learn it’s Dick Grayson wearing a clever electronic mask to hide his identity as a crime fighter.

For those coming in new to Batman, the good news is, you don’t need to figure out who is who, and what is what. The computer gimmick continues to play out through the issue telling Bruce, and thus the reader, who the people are he is encountering, and why they are important. In a single panel, readers learn who Dick, Tim, and Damian are, and there is no need worry about the villains, Snyder has written the introduction in such a way that n00bs get the important facts fed to them maybe without even knowing it.

Because Snyder isn’t forcing Batman/Bruce Wayne’s history down our throats screaming “PAY ATTENTION!” all the way, the important information flows just like it would if you’ve been around friends or family for a long time – it comes out during the course of normal conversation.

There are two important story elements that come out of this issue. The first is that Bruce Wayne wants to rebuild the derelict sections of Gotham City (something long time readers have seen before). The second is someone is going to kill Bruce Wayne, and it just might be someone very close to him. The way the killing arc of this story unfolds reminds me a great deal of the movie Se7en. It’s spooky, it’s dark, it’s grim, but it doesn’t come off as the grim and dark Batman tales from the ‘80s… too much. Batman fights, Batman does the leg work required to be a good detective, Bruce Wayne impresses the ladies, and gets the wealthy to part with their funds for a good cause.

BUT IS IT A RELAUNCH?

As we’ve learned, some portions of the DC Universe have seen a complete change from what has come before, while other more popular characters (Batman and Green Lantern) haven’t been tweaked that much. It’s clear that this story takes place in the here and now, as evidenced by the various gizmos, geegaws, and Batmobiles in the Batcave. All the Robins are around, and even the presence of Professor Pyg harkens back to the most recent Grant Morrison Batman and Robin run, though I will admit it brought me great joy to see Batman fighting his old foes, and with each punch mentally calling out there names, only to dismiss Pyg with a single punch with nary a mention of who the character is. Granted, Bruce Wayne wasn’t Batman when Pyg appeared, but this dismissal almost feels like Synder is dismissing that portion of the old DC continuity (Mystery Woman, Page 1, Panel 1). The one thing that seems to have changed the most in Batman’s universe is that Jim Gordon isn’t the gray-haired, troubled commissioner we’ve known for the last twenty years, but rather a younger version of that man.

For those of us who have been reading Batman for decades, yes – we’ve seen a lot of this same stuff before. And yes, I understand your frustration in thinking this is nothing new. Sure you can be THAT guy and dismiss everything being attempted in this issue. But, if you were to look at this from the perspective of someone who knows nothing about Batman except for what they’ve seen on television and on the silver screen, this is one of those books that is perfect for the new reader. And for those of you who have become disillusioned with the all powerful, all knowing Batman, this is that booster shot the character was in need of.

While Snyder hooked me with a story that hit all the right notes, it is the art by Greg Capullo that seals the deal. My god can this man draw a page! It’s breathtaking and disturbing at the same time. When the issue starts, Gotham feels gothic. It looks worn and aged. When the scene switches to Arkham, Capullo makes it feel dirty and run down. When Bruce pitches his bright and shiny Gotham to the rich and famous, the surroundings feel regal and posh. And when the story turns to the dark murder, Capullo frightens me with his attention to detail in each and every panel.
And if the environments don’t sell you, then his take on the characters certainly will. I’ve complained in the past about artists who draw all characters the same way; same build, same height, same, same, same. Capullo gives each character… character. Tim, Dick and Damian are different, they look unique. Bruce Wayne doesn’t come off as a seven foot tall all-star athlete. There are characters who are taller than he is, and he isn’t portrayed as the dashing ladies man with a perfectly chiseled face and coiffed hair. His hair look tussled, and his face if flatter than those around him. I like it. I like it a lot. I am now on a mission to find and read more books with Greg Capullo’s art inside.

Sure, I’m a Batman fanboy. I’m not afraid to admit it. I’m also not afraid to admit when Batman tales blow monkey chunks. This is not a book that blows monkey chunks. Batman number one, has all the information a new reader will need to quickly imerse themselves into this title, has a great story hook to keep new and old readers entertained, and art that is stunning. I wasn’t sure there was going to be a best of the week for me, but Batman #1 has done it. 5 out of 5 Stars. If you are on the fence, get off now, and pick up this book.