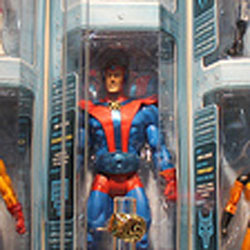 Mark your calendar and start saving your pennies because Mattel has just announced the big Legion of Super-heroes 12-pack goes on sale October 17, 2011.  The MattyCollector.com servers will feel the strain of millions logging on at 9:00 AM PDT to get their hands on one of the biggest collections of action figures the company has sold at one time.

Also be on the lookout for the DC Universe Classics Wave 17, that features Wonder Woman, The Atom, Scarecrow, Lex Luthor, Hal Jordan AND Hal Jordan, along with the Flash in their Blackest Night lantern costumes.