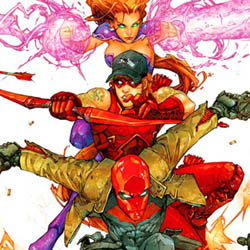 Or – “Keepin’ Your Gingers Numbered For Just Such An Emergency…”

So, I have a confession:  I don’t always read my comics first thing on Wednesday.  That said, I managed to hear about the controversy about characterization in this book BEFORE I read it.  Now, as for how it affected my enjoyment of the book?  For that, we have to digress, just a bit… Previously, in Red Hood And The Outlaws:  There is an old and storied tradition in superherodom whereby the experienced hero takes a youngster and teaches him or her the ropes.  Captain America had Bucky, Catman had Kitten, even Captain Battle had Captain Battle, Junior.  (Occasionally, they inverted it, as with Stripesy, or even avoided it entirely as with Captain Marvel, Jr.)  That has led to triumph and tragedy over the years (and given the current status of Wally West and Bucky Barnes, even the triumph has it’s elements of tragedy) but few sidekicks have had it worse than Roy “Speedy” Harper and Jason “Robin II” Todd.  From drugs to sex addiction to brutal murder, the erstwhile Red Hood and Arsenal have been through hell in the old DCU, and it seems that at least part of that has carried over into the new DCU.  Chuck in a character arguably best known for an extended relationship with Jason’s predecessor, and this could get interesting.

IT COULD ALSO BE A TOTAL CAR CRASH.

The opening sequence of this issue reminds me of nothing so much as the movie “Point Break,” with Roy Harper as Keanu Reeves and Jason Todd as a very-Batman-influenced Patrick Swayze.  Roy has been captured by by Quraci insurgents after helping to overthrow their leader, but he is allowed a visit from the in-universe non-specific equivalent of Amnesty International.  The art is quite beautiful, as Kenneth Rocafort makes Roy look as though he really has been stuck in a Quraci prison for month, but annoys me by having Red Hood’s mask (seemingly a metal or ceramic faceplate) show emotions.  Where it all starts to jump off the rails is the moment where Roy points out attacking artillery, and Jason replies that instead of a backup, he has 38 of them.  This leads Roy to respond, “Who do we know who carries a pair of 38’s?”  First of all, the pun is really strained and immediately took me out of the issue, and secondly, it doesn’t even really follow from what Red Hood actually SAID.  Starfire comes in hot, guns blazing, and stop with the jokes, because I know where you’re going from “hot” and “guns.”  I don’t mind her new costume so much, except for the region of bra/armored bodice thing, but Rocafort’s redesign of Koriand’rs legendary hair is kind of disheartening.

THE LADY OR THE TIGER?

We cut from jokes about one of our character’s breasts to a full-page spread of her showing them off, swimming in the ocean.  It’s gratuitous, but seems to almost serve a plot point, as a kid snaps a photo of Kory in her bikini and uploads it to the internet.  Rocafort draws a very lovely Starfire, but it gets really squicky as Jason reveals to Roy that Kory doesn’t really remember much about her relationship with Dick Grayson or her time with “the gang you USED to hang with.”  And then, we get the scene that has the internet ablaze, as Starfire walks up to Roy (while Jason is occupied talking to an invisible woman) and blankly asks if he wants to have sex with her.  Starfire’s lack of pupil, combined with Rocafort’s relatively stiff positioning and the utter blunt cluelessness of the dialogue combine to create a picture of Starfire as the perfect-10 love doll imaginary girlfriend, and it frankly bugs the hell out of me.  The rest of the issue is Red Hood off on a quest for a lost society or something that reminds me of R’as Al Ghul in ‘Batman Begins,’ but it feels a bit flat, and the issue never manages to get the unpleasant taste that the beach scene leaves behind.

THE VERDICT: BETTER THAN YOU MIGHTA HEARD, BUT…

If I were to break this issue down, it’s 1/3 pretty awesome Butch and Sundance adventure, 1/3 mysterious-but-cliche-and-familiar fighty-fighty conspiracy blah-blah, and 1/3 talking with a particularly egregious failure of both character and editing, the comic book equivalent of finding a mess of gristle hidden in your steak.  I’m unnerved at the fact that Starfire’s sense of sexual liberation (which has ALWAYS been with the character, let’s be honest) has been conflated into such a ridiculously mistimed and out-of-tone moment.  If I were to rate the issue based everything BUT that page, I would characterize this as a well-drawn, middle-of-the-road relaunch outing, but the juvenile treatment of sexual matters here renders one of the main characters into nothing more than a punchline, and in a book with only three characters, that’s unforgivable.  Red Hood & The Outlaws #1 does a lot right, but the wrongs are so wrong as to imbalance the whole issue, earning 1.5 out of 5 stars overall.  I don’t want to chalk this one up as a complete loss due to some seriously dubious gender political issues, but I would have had a lot more fun if the sexy bits were less creepy and Starfire played for more than objectification.

Faithful Spoilerite Question Of The Day:  With the revelations that Arsenal/Speedy’s “old gang” (implicitly the New Teen Titans) existed in this reality, I start to wonder who, exactly, the characters who DC hinted don’t exist any more actually ARE?