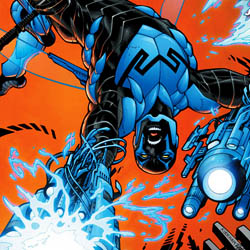 When DC first announced that they were going to relaunch all their titles with a new #1, I worried that all the same characters were going to come back.  Thankfully, the lineup is a bit more diverse (in more ways that one) than the post-Brightest Day offerings, and more importantly, characters like Blue Beetle would get another shot in the limelight.  But will it take this time? Previously, in Blue Beetle:  Jaime Reyes somehow bonded with an alien scarab, and gained superhuman powers, but the fun and games ended quickly when the scarab was revealed to be a tool of alien invaders known as The Reach.  Eventually, Jaime teamed up with Booster Gold and other surviving members of Justice League International to stop the machinations of Maxwell Lord, just in time for Barry Allen to reset the universe…  Now, Jaime is just a regular guy, there is no Blue Beetle (and may never have been one) and the Reach has never made their way to Earth.

The issue opens in deep space, as a pretty much indistinguishable race of fleshy-headed mutant aliens finds themselves under attack.  A very familiar black-and-blue costumed figure cuts a swath of destruction across the planet, and quickly subjugates and/or destroys all of the populace.  We see the young creature lamenting that he just destroyed his own homeworld (an unnerving, if somewhat ham-fisted scene) before we meet The Reach.  Seems like the origin of the scarab is intact in this new reality, and as for Jaime Reyes?  He’s MOSTLY the same as well.  His friend Paco is still a ne’er-do-well (and now a dropout), his friend Brenda is still a teenage cutie who may or may not be the object of Jaime’s affections (and Paco’s, for that matter) and his family feels similar (though his father seems to have lost a lot of weight) as well.  Much of the dialogue come in a mix of English and Spanish (one footnote even says that it is “translated from the Spanglish”), though, and I have some issues with that terminology.  I wonder how a more experienced Spanish speaker would feel about the almost gratuitous use of words and phrases in some rather awkward (to my ear) ways.

AND SOME OF THIS SEEMS ODDLY FAMILIAR.

Brenda’s aunt still seems to have her mysterious ties to superhuman crime, and we quickly find that she is seeking an artifact of great power, sending her own personal villains against the forces of the Brotherhood of Evil (Plasmus, Warp and Phobia, all of whom refer to the Brain and Monsieur Mallah, making me happy to see that some well-designed villains are back from the unnecessary dead).  More dialogue related uncomfortableness follows (Warp is French, Plasmus German, and the local villains continue the use of high school Spanish as punctuation) but overall, the story flows pretty well.  Jaime and Paco fall into the midst of the battle (on their way to Brenda’s birthday) and the scarab ends up in Jaime’s possession just in time for the villains to try and kill him.  He falls, and the scarab ends up embedded in his spine (!!).  The issue began with the alien scarab-wielder being overtaken and crying out “Khaji Kai!,” and it ends with Jaime in the same position, screaming “Khaji Da!”  It’s a nice callback, and a bit of foreshadowing that works pretty well.

THE VERDICT:  NOT EXACTLY WHAT I EXPECTED…

As with Justice League International a couple of weeks ago, this issue’s dialogue and story felt remarkably like it was aimed at a lower reading audience, and the language was problematic throughout.  Part of me wants to say that the “Spanglish” (a term that I’m kind of uncomfortable with, honestly) dialogue was trying TOO hard for diversity (see also Stephen’s feelings of Mister Terrific) but the central piece of the current Blue Beetle, a normal kid with an alien in his spine, is clearly definined in the last pages.  Of course, this book is the first to revamp a truly modern character (or, more properly, character concept) and so the fact that we just saw Jaime’s origin five or so years ago is fresh in my mind.  Overall, Blue Beetle #1 has a few missteps, and I would have liked a little more Jaime Reyes while the book introduced it’s supporting cast, but it’s a likeable little book, earning 3 out of 5 stars overall.  I only wish there had been a little bit more going on, and perhaps a more consistency in the transitional language.

Faithful Spoilerite Question Of The Day:  Is it just me, or does the “translated from the Spanish” joke seem a bit demeaning to the main character and his family?