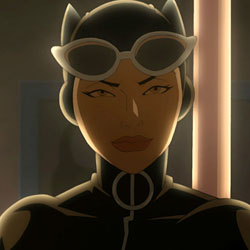 Central to the panel will be the world premiere of the animated short Catwoman, starring Eliza Dushku (Buffy the Vampire Slayer, Dollhouse) as the voice of title character. The 15-minute short will be included on the release of Batman: Year One, which streets October 18 on Blu-ray, DVD, for Download and On Demand.

The panel will also include the very first footage to be seen from Justice League: Doom, the highly-anticipated next entry in the ongoing series of DC Universe Animated Original Movies. The panelists, which include the ultimate voice of Batman, Kevin Conroy, DCU executive producer Bruce Timm and casting/dialogue director Andrea Romano, will offer a glimpse into the 2012 DC Universe Animated Original Movies slate, give away some exclusive prizes to inquisitive audience members, and quite possibly welcome a few surprise guests to the stage.

An autograph session with the panelists will immediately follow the panel.