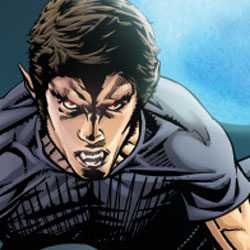 Following the immediate success of MTV’s newest hit show Teen Wolf, Top Cow Productions and MTV Comics are presenting a three issue comics series based on the show that will hit store shelves and digital platforms soon. When the new comic book series was announced at Comic-Con International in San Diego, the fans of Teen Wolf swarmed Top Cow’s booth for the exclusive preview of the comic and stood in line for hours waiting to meet the cast and creators of their newest favorite teen horror drama.

This three issue miniseries will begin shipping in a week and, like the break out successful MTV Television series, will appeal to the fans of the original films as well as cultural icons such as the Twilight Saga and the Vampire Diaries. Written by David Tischman (True Blood, Bite Club) with art by Stephen Mooney (Angel) and covers by Joe Corroney (True Blood: Tainted Love), the series will act as both an introduction to new fans of Teen Wolf and augment the viewing experience of the hit MTV show.

“TEEN WOLF reimagines the worn-out werewolf genre, and turns it into a modern story of horror and hot love,” explained writer David Tischman. “The scripts are so smart, and I worked with [showrunner]Jeff Davis to keep the same scary horror we see each week on the show; the personal horror of Scott dealing with being a werewolf, and the predatory horror of the werewolf culture. But I also really wanted to focus on the relationship moments between Scott and Allison. In those scenes, I think everybody remembers what that first love was like — the scary, gut-wrenching “does she like me?” and “can I touch that?” moments we all have growing up. The book’s been a lot of fun to write, and I can’t wait to see what Jeff comes up with for Season 2.”

Scott McCall’s life is a living nightmare. Sure, he’s co-captain of the Beacon Hills High Lacrosse Team and his hot new girlfriend, Allison, adores him, but Scott was bitten by a werewolf. And every time he gets excited, the claws come out. And the hair. And the fangs. That might be okay, except Allison’s father leads a specially trained group of Hunters who want him dead. Scott’s managed to keep his secret safe, but what happens when he can’t reverse the process? TEEN WOLF: BITE ME #1 (JUL110434), a full color comic will be on sale in stores on September 21 for $3.99, along with a limited photo variant cover at participating retailers.

ABOUT MTV
MTV is the world’s premier youth entertainment brand. With a global reach of more than a half-billion households, MTV is the cultural home of the millennial generation, music fans and artists, and a pioneer in creating innovative programming for young people. MTV reflects and creates pop culture with its Emmy®, Grammy® and Peabody® award-winning content built around compelling storytelling, music discovery and activism across TV, online and mobile.

MTV’s sibling networks MTV2 and mtvU each deliver unparalleled customized content for young males, music fans and college students, and its online hub MTV.com is the leading destination for music, news and pop culture. MTV is part of MTV Networks, a unit of Viacom (NYSE: VIA, VIA.B), one of the world’s leading creators of programming and content across all media platforms.