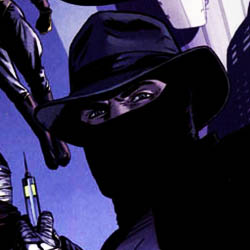 While I appreciate the simplicity of certain names and titles, it always galls me when the Big Two (and especially Marvel, given their history) appropriates a name that has been used by another company.  And given that Bob Burden’s Mystery Men, while obscure, had their own movie a while ago, the use of the Mystery Men title seems like an intentional attempt by Marvel to engulf and devour all that the comics industry has ever had to offer. Previously, in Mystery Men:  A few years before Captain America, Namor and The Human Torch busted onto the scene in flame, water, and red-white-and-bluey-goodness (that being in reverse order, mind you), a man called The Operative has taken to the streets in two-fisted glory.  An evil creep known only as The General has kidnapped children (including the infamous Lindbergh baby) to sacrifice so that he can bring a satanic presence back to the real world.  Teaming up with The Aviatrix, The Surgeon and The Revenant, The Operative fights against evil to defend truth, justice and the overuse of definite articles…  FOR AMERICA!

PULP HEROES IN THE CLASSIC TRADITION…

This issue opens with our heroes beaten and defeated, separated and sent to ground in their own various worlds.  The Revenant and The Aviatrix have gone away to work on a mysterious project, Achilles is off killing the scum of the underworld, The Surgeon is being a wonk, and The Operative is trying to come to terms with the revelation that the evil General is his own father.  While the heroes are scattered, the villain has gathered a council of like-minded lunatics and world-beaters (including Baron Heinrich Zemo, he of the about-to-have-a-purple-hood-glued-to-his-face) and has shown them the plan to revive Nox, a dark demonic creature of the night.  The council isn’t sure about the whole “murder kids” angle, until The General kills a man to show him the truth of his power.  The dominoes start to fall as The Surgeon finds The Operative, who finds a clue that requires Achilles skills to translate…  Soon, the five “mystery men” are once again united to stop The General and his cabal of evil, headquartered (naturally) on a zeppelin.

A NICE BIT OF WORLD-BUILDING…

I really enjoyed everything about this issue, from the moody art to the nods to old serials to a few moments that I’m sure were designed to evoke Indiana Jones, itself descended from the old serials of the Great Depression.  The heroes fight the villains, and The Operative goes mano-a-mano with his evil father, now transformed into a werewolf through the power of evil.  The characters have some lovely lines, and Achilles redeems himself in battle with the demonic Nox herself.  The best part of the issue for me comes when the characters break up the villains’ scheme, but things end ambiguously enough for a sequel, and historical events regarding the actual Lindbergh baby are maintained.  The art is top-notch throughout the issue, especially the mid-air battle sequences, and I love the designs of The Operative, The Revenant and the Aviatrix.  Of all the recent retro miniseries that Marvel has put out, this one is the most consistent and entertaining for me.

There aren’t many thing that I would consider problems with this issue, but having missed some of the previous 4 issues, it does take a little bit of time to get to the meat of the matter, and I spent a lot of time trying to figure out if I knew any of the other characters from the Council of Evil after Zemo was identified by name.  Still, any concerns along those lines are short-lived, and the battle sequence (especially the characters quips after the defeat of the General) are worth the price of admission…   It’s also worth noting that this book is a $2.99 affair, rather than Marvel’s seemingly preferred $3.99 price point, which helps in the decision to pick up a random new miniseries with characters one has never heard of.  Mystery Men #5 caps off the series nicely, using Marvel’s retro-history to great effect and earning a very impressive 4 out of 5 stars overall.  A sequel for this would be completely welcome…

Faithful Spoilerite Question Of The Day:  Would it be cool or stupid to have these characters (or their legacies) show up in the mainstream Marvel Universe?  I’d love to see more of the Revenant…