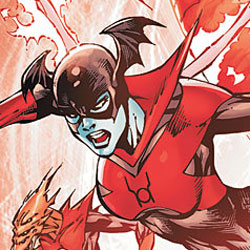 Take one lone survivor of his race, mix in a bunch of rage, a red ring, and a cat that vomits red rage on its enemies, and you have the makings of the antithesis of the Green Lantern Corps. Enter the Red Lanterns! Previously in Red Lanterns: During the whole Sinestro Corps War, and the subsequent Darkest Night event, readers learned that there were more than just the Green and Yellow Lanterns – an entire rainbow of flavor and emotion patrol the universe, each Corps with their own agenda. For the Red Lanterns, it is all about rage, and their leader, Atrocitus is the ragiest rager who ever raged.

I’M NOT AS ANGRY AS I USED TO BE

For some reason, the events happening in the Green Lantern books haven’t been as affected by Flashpoint and the subsequent DC Relaunch. Save for the current status of Hal Jordan, everything still seems to be moving along as if nothing has happened, almost as if everything is localized to Sector 2814 and Earth specifically (Mystery Woman – page 16). In this first issue, readers are introduced to the “true” history of Atrocitus told through his eyes, and not through the green tinted glasses of Geoff Johns Green Lantern: Secret Origin.

To fill everyone in, we get a flashback (told by Atrocitus) that in an attempt to make the Guardians reconsider an emotional police force, Krona tweaked the Manhunters to kill an entire sector, which included Atrocitus’ family and entire race. The rage over this genocide, sent Atrocitus on a quest for revenge, that played out across the previous story events. Though now, after the last big bust-up event, the central character isn’t as angry as he used to be, and he seems lost trying to find meaning in life. That is until the blood from the dead body of Krona (don’t ask, it’s pretty weird and creepy) re-ignites his passion for revenge.

And while the previous incarnations of the Red Lanterns were all about hate, this time around, Atrocitus wants to be the hand of vengeance, righting the wrongs inflicted on others. Oddly, Atrocitus doesn’t come off as a bad guy in this issue, and his new quest/mission seems to be more like The Spectre. Of course Atrocitus is going to need the rest of the Red Lanterns to follow him, and right now it looks like they are more consumed by rage than vengeance. And that is going to be a problem.

It may be because of the constant vomiting, or maybe it is the over use of the color red, or maybe, just maybe, I’m simply not a big fan of making a villain a sympathetic hero. While Peter Milligan attempted to pull on the heartstrings and make the reader feel something for this misunderstood character, it didn’t work for me. Unlike many who might be reading this for the first time, I know what came before, and no amount of cheese is going to make me feel anything for this character in the long term.

Did I mention there is a lot of red in this issue? There’s also a lot of violence – and by violence, I mean torture, beatings, killings, and general hooliganism that really shows the evil in the DCnU. Granted the level of violence doesn’t reach Crossed status, but for a DC book, there’s a reason this is getting a Teen Plus rating. The big question then is, “does the artist glorify the blood and guts, or does the artist attempt to bring more to the table?” The good news is Benes doesn’t let the imagery get too out of control, and a lot of the extreme moments take place off panel.

With the success other companies have had in creating popular antiheroes, I can’t help but think DC is trying to at least capture a portion of that market for themselves. It isn’t the first time the company has done this, and I’m sure there are some who are going to dig everything the Red Lanterns series will offer. The writing is solid, and the art is good, but at the end of the day I don’t think this series is for me. Red Lanterns #1 felt a little empty, and earns 1.5 out of 5 Stars from me. Of course, your milage may vary.