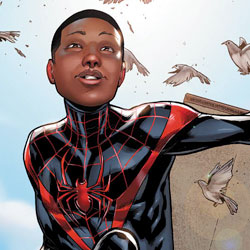 Editor Note: Take this press release with a grain of salt. To date, no one is reporting the actual numbers of digital downloads. Not Marvel, not DC when two weeks ago JLA “broke records”, not even Atomic Robo who was one of the early comics to get on the digital bandwagon. When we have actual numbers, then announcements like this can be hailed as wonderful and exciting. Until then, Reader, meet company generated press release… (after the jump).

“I am completely humbled by the support and success of Mr. Miles Morales in both print and digital” said writer, Brian Michael Bendis. “Nothing frustrates an author more than his work not being able to get into the hands of the people that want it, and now with the Marvel Comics app we can!”

“We’ve been doing the day and date comics for about a year now since the launch of Ultimate Comics Thor #1, and each subsequent release has not only seen increased sales within the app, but we’ve also seen a great trend in which the print comic reorders increase exponentially,” added David Gabriel, SVP of Sales. “We’ve been pushing to make Ultimate Comics Spider-Man our top release to date, and the results we’ve seen both here and in print certainly show us that we’re heading in the right direction.” Haven’t jumped into the Ultimate Comics Universe yet? Well there’s no better time than now! Learn all about how a regular kid from Brooklyn will soon learn an all new meaning of power and responsibility, courtesy of superstar creators Brian Michael Bendis and Sara Pichelli. So what are you waiting for True Believer? Head to the Marvel Comics App and see what everyone is talking about, today!