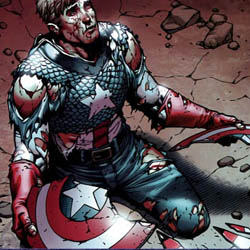 Or – “Boiling Something Down To It’s Essence Has A Problem…”

…namely, that most of these characters have been around so long that they have more than one “core truth.”  Whether or not you like this issue (and, indeed, this whole CROSSOVER) is going to depend on whether you share the creative team’s assessment of Marvel’s most iconic heroes. Previously, on Fear Itself:  Asgard.  Home of the Norse Gods of lore, led by all-father Odin.  No setting in the entire Marvel Universe (save for perhaps Attilan, home of the Inhumans) makes you think more of towering spires, of golden sunsets, of beauty and wisdom and like that.  So, it makes perfect sense that Asgard has been stuck right in the middle of the last few psycho-blam-blam crossovers, and has become a blood-soaked ruin in the middle of the Oklahoma plains.  To add insult to injury, Odin’s brother (the mysterious Serpent) has returned to Midgard/Earth and has set off on a reign of terror unseen since…  Umm…  What was the last big crossover schmageggi?  Secret Invasion?  Excellent.  Since that.  Seven hammers, blah blah blah fishcakes, smashy smashy.  The core of the Avengers has likewise been splintered, with Iron Man building weapons in Svartalfheim, Captain America facing a losing battle in Manhattanflheim, and Thor flat on his tuchasheim.  Things look grim, but as my friend Otterdisaster is prone to say, it’s always darkest right before it’s PITCH BLACK.

So, it’s been ten years since the events that have become known as 9/11, and that fact has not escaped the creative folks at Marvel.  We open this issue with a very familiar looking cityscape, shattered buildings, fire, smoke, and vehicles thrown about like toys.  It actually bugged me that they were evoking this imagery, during this week, and then Captain America speaks: “Not thrilled about the visual here, gang…”   Matt Fraction’s middle-America plain-speaking Captain America isn’t discussing the parallels with 2001, but the fact that Earth’s Mightiest Heroes are retreating from battle with Thor on their shoulders, while the population of New York watches.  Luke Cage volunteers to take his team and run the evacuation of Manhattan Island (!!) while Captain America takes his squad to Asgard to heal the Thunder God.  It’s a heroic moment, until you remember that no one on Luke’s team save for Doctor Strange has any power that amounts to anything more than “Hittin’ stuff hard.”  There are some nice character bits in the issue, especially when Captain America confronts Odin with a full-bore R. Lee Ermey moment.  “You’re gonna need more guys!” snarls the Sentinel of Liberty after seeing Odin’s armies, while The Serpent laughs maniacally somewhere else and tells Skadi/Sin that he knows he will die in battle with Thor, but that she will ascend to power over the ravaged Earth.

This book is very well-written, and very well-drawn, and every page has moments of character for the heroes of the Marvel U.  Spider-Man finds Aunt May, who reminds him that his responsibility is to be a hero.  Iron Man has created weapons to empower his Avenger pals against The Worthy.  Captain America picks up a rifle and leads the people of Broxton, Oklahoma in exhibiting their second amendment rights.  Thor makes peace with his father, and swears himself to be a MAN, the man Odin taught him to be.  What makes the issue work or not work is what you see.  I am troubled by seeing Captain America give up leadership of the heroes of the Earth to “man the line” and be a footsoldier.  I am troubled by Spider-Man running away from a fight to find his mommy.  I am less troubled by Tony Stark taking up the bottle again, but still I find myself asking what’s different in this crisis than in Civil War, or The Infinity Gauntlet or the Secret Wars.  What makes this battle with unstoppable gods any different than the last SIX battles with unstoppable gods?  And as much as I like Fraction’s dialogue, why does it feel like I’m reading a different Spider-Man, Captain America and Thor than I read in their home titles?  Basically, this issue is the prelude to war, and it’s a successful book in that aspect, but for some reason, I can’t reconcile it with what I already know about the Marvel Universe.

So, how do I rate something like this?  Stuart Immonen’s art is terrible and beautiful all at once, and the inking and coloring are first-rate.  Fraction has crafted a smart tale with nice moments here and there, and even as this issue amounts to a lot of talking (welllll, yelling, really) it feels like productive talky-talky.  There’s nothing here that’s anything less than good, but I still don’t know how I feel about Fear Itself as a whole or this issue.  If it weren’t so PERVASIVE, perhaps these pages would hold more power?  I mean, really, I’ve been reading about the fear for almost seven months now, but the story has covered something like a day and a half, and I have a terrible feeling that a year from now the next crossover will be here to show us how nothering will ever be the same.  Again.  We’ve been given scene after scene to show us that this is the worst threat EVAR, even shattering Captain America’s unbreakable shield, but the effect is officially overwhelming.  Fear Itself #6 is a good issue standing alone, but the wave of hype, the flood of crossovers, and the sheer bludgeoning weight of the crossover event keep me from enjoying it, leaving the book with a disappointed and weary 2 out of 5 stars overall.

Faithful Spoilerite Question Of The Day:  I know that Spider-Man is a down-to-earth, feet-of-clay superhero.  But am I the only one finding his swinging off to find Aunt May a weird, almost cowardly move?