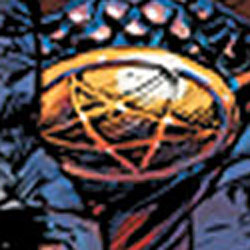 If you ever wondered what would happen if DC Comics decided to create a sword and sorcery tale that feels very much like a certain game campaign that you and your friends played on a weekly basis, then you are going to LOVE Demon Knights. Previously in Demon Knights: Well, there really hasn’t been any major tales set in this time period featuring all of these characters, so this is all new and all fresh… unless you play Dungeons and Dragons.

SEVEN CHARACTERS IN SEARCH OF AN ADVENTURE

If you are going to set a story in a fantasy dark age, there is going to be more than a passing resemblance to role playing games. Instead of trying to reject the trope, Paul Cornell takes the ball and runs with it, throwing in everything from dragons and an evil witch taking over the lands, to the central characters meeting in a tavern. The overall plot pretty much follows that path; we are introduced to the characters one at a time, and readers learn that Morgaine le Fay and Mordru (Yes… THAT Mordru) are making their way across the land, killing and conquering wherever they go. Cornell gives readers just enough information to set up the world and its inhabitants, and that is exactly what a first issue needs.

And what a mix of characters Cornell is serving up in what has become an odd Seven Soldiers of Victory:

Jason Blood/Etrigan (The Rogue)
As DC continues to give us a different look at their universe, some character’s origins are changed, others are tweaked, and some are brand new. For Etrigan, the Demon, the base origin remains in tact as Merlin binds Belial to Jason Blood. Blood is able to change between demon and man, with each having no idea what the other has done or is doing. This is really important because Jason’s traveling companion/lover in this tale is none other than…

Madame Xanadu (The Sorceress)
Another immortal, Madame Xanadu travels with Jason across the lands as they seek “something” (maybe adventure?), but it seems like trouble is always following the two. I like the play between the two characters. It looks like they have a fun time teasing one another, and there appears to be the hint of true love, but the real interesting twist arrives when Jason turns into Etrigan, and readers learn that Xanadu and Etrigan get it on… a lot. AND Xanadu prefers Etrigan over Jason. It’s a weird love triangle that Cornell needs to explore further, and I can’t wait to see how that plays out.

Vandal Savage (The Barbarian)
I didn’t expect to see the Vandal Savage appear in the story, and was even more surprised that he wasn’t the big bad in the tale. Instead, he’s the barbarian character that Xanadu and Blood have encountered several times over the ages. I like that Cornell doesn’t skip on the immortal aspect of these first three characters and their previous run-ins with each other. It’s been 90 years since the three have met, and since there is currently no reason to quarrel, the three sit down for a pint at a local tavern to share stories.

The Shining Knight (The Knight… duh)
When the tales begin to be told, The Shining Knight makes his/her appearance. Sir Ystin introduces himself, but it is clear to the reader that the hero looks more female than male in this incarnation – something that all of the characters notice as well. While I think the Sir Justin version of The Shining Knight is more recognizable due to his appearances in Justice League Unlimited, Cornell’s decision to use Grant Morrison’s take on the character (Ystina) from the Seven Soldiers miniseries is another interesting twist in the story, and I like it.

Al Jabr (get it? Algebra…The Thief? The Bard?)
A new character that that is new to the DCU, Al Jabr should provide some character diversity in this series. It’s pretty clear from his clothing that he is from the Middle East, and combined with the “We don’t serve your kind here” comment made by the barkeep already has a few feathers ruffled across the Intardwebz. All I can say is he is a new character, and until he gets more speaking lines (he only has three and a half lines), I’m going to hold of any judgements.

Exoristos (The Warrior)
Long before Princess Diana got off the island, Amazonian warriors were roaming the lands – at least in this version of the DCU. Again, we don’t learn much about Exoristos except she has a bad temper, is willing to start a fight, and doesn’t care for men all that much.

Even though we get little to no character growth in the initial introductions, I’m loving these characters so far. Even with Al Jabr’s three lines, I like him.

Wow. The art in this issue is fantastic. Diogenes Neves serves up panel after panel of imagery that is so detailed, it takes longer to read this issue than others because you are sucked into the world. (Mystery Woman – page 7) I hope he can keep up the pace, because I want to see this level of art throughout the long long run this series is sure to have.

While Cornell does a great job of telling us a story, and Neves serves up the art to us in a spectacular way, the one thing I found most frustrating was the way dialogue was broken –

Yes. It was THAT annoying. I can understand dialogue spilling over and serving as a bridge between locations and scenes, but to have small balloons that break up the flow of the words was just off for me.

BOTTOM LINE: BEST OF THE WEEK

When Demon Knights was first announced, I was hooked by the promise of Etrigan being front and center. After the initial announcement, I pretty much shut my mind off from news of other characters and general setup, so when I did sit down to read the issue, I was completely drawn in and had a blast with everything from beginning to end. Demon Knights #1 has a great story hook, fantastic art, a great cast of characters, and that questing adventure feel that makes this a book that can’t be missed. Pick up Demon Knights #1 before it is too late. It’s a fantastic read and earns 5 out of 5 Stars.