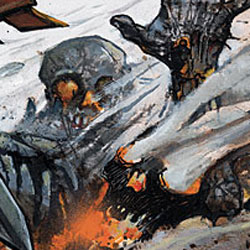 Slade Wilson, also known as Deathstroke the Terminator, has moved on from commandeering a doomed team of Titans to go back to his roots as the best merc on the planet. Previously in Deathstroke: Deathstroke recently got done heading up a team of Titans in order to revive his son. In the process he killed Ryan Choi, the new Atom, and infuriated legions of fans in the process. Now he is back, and doesn’t seem to be much tied to that continuity…

DEATHSTROKE IN NAME ONLY

We haven’t had a Terminator ongoing in a while, but this take on Slade is purportedly a return back to the 90s series that bore his name (the name of this issue is “Back to the Basics”). I read a few issues of that series that I found at a flea market, and I do not see the similarities at all. Kyle Higgins is writing Deathstroke as heartless and cold, killing anyone who he sees as competition and treating his agent/partner Christoph like crap. From what I remember of what I read in the admittedly few issues I saw, Slade was an anti-hero, but not an outright jerk. He treated his partner Wintergreen with respect and friendship, and his family was an important part of his character. Kyle Higgins has mentioned that this take on Slade is putting his family on the backburners as he focuses on being a mercenary, which in my mind is not the right way to handle the character.

Without family, Slade is essentially mimicking the original Joe Kelly Deadpool character, who was conceived as a ripoff of Deathstroke (Wade Wilson vs Slade Wilson, and keep in mind that the best place to do a Death-stroke is in a Dead-pool). You can argue whether or not that original Deadpool was good or not, but no matter what your opinion the facts speak for themselves: the Deadpool we have now is NOT the same Deadpool we had then. The serious take on a mercenary who is only out for themselves doesn’t really work for long, just like an unmasked Peter Parker. If this title wants to be successful it is going to need to find a unique voice.

IS HE A MERCENARY OR A TANK?

From the first cover I was not excited about the redesign of Deathstroke; he is far too armored to convince me that he is going to be a successful assassin/mercenary. For someone who is dependent on quick motions and hand to hand combat, his armor doesn’t seem like it will give him a very large range of motion. The art style is very much the 90s “Deathstrike Bloodforce” hyperviolence and adrenaline-laden type that DC is hoping will appeal to the mid-teenage crowd. Unfortunately, it doesn’t do much for me. The artist’s talents are evident on the title, but the style in which he is drawing it just serve to bother me. I feel if Joe Bennett was drawing a different title I would enjoy his work, so I am just going to chalk this one up to editorial mandate.

BOTTOM LINE: I WILL PASS ON THE TERMINATOR

As much as I wanted to like Deathstroke, this series is really not aimed at me. If you’ve come this far in the review then you can probably make an informed decision whether or not you’ll enjoy this book based on my description, but for my part I can only give Deathstroke two out of five stars.