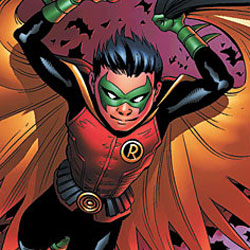 Bruce is the sole bat, Damian’s the kid brat, and Alfred’s gonna eat his hat in this month’s Batman and Robin #1! (Spoiler alert: Alfred doesn’t actually have a hat. But the guy killing Bat-men has a cool looking mask!) Previously in Batman and Robin: Bruce Wayne had an out-of-continuity son with Talia al-Ghul, Damian Wayne. After having Damian trained by the League of Assassins for a number of years, Talia convinced Grant Morrison to write him into continuity, and proceeded to drop him off at Bruce’s doorstep. Damian then took it upon himself to become the world’s most obnoxious Robin, surpassing even the retconned hubcap-stealing Jason Todd. Dick Grayson managed to tame him a bit, but now that Damian is Bruce’s Robin, we can expect the dynamic to shift a bit.

And shift it does. Damian’s obnoxiousness jumps off practically every page, which makes for hard reading at times. The story is pretty straightforward; we see a masked figure attacking a Russian who claims to be an ally of the Bat (implying Batman Inc is still going forward, though in a different form perhaps). We then get Bruce deciding to take Damian out with him to Crime Alley on this night, the anniversary of his parents’ death. Damian of course couldn’t care less about his dead grandparents, and is suitably impertinent in the chat with his father. Bruce has decided this is the last time he will revisit Crime Alley on the eve of his parents’ death, and instead honor and remember them on their wedding anniversary; a significant step in the character of Batman, especially since this relaunch is seeking to set the tone for the character (though so far between this, JL and Detective we have seen three fairly different Batmen, two of which are supposed to be taking place at roughly the same time).

This book feels like more of a number one issue than most of the relaunch titles so far; Tomasi’s dialogue gives us a lot of exposition, and some of it seems a bit forced. Damian’s character has definitely taken a BIG step backwards, being closer to the Batman and Son Damian than the end of Batman and Robin Damian; I am hoping it is just the pressure of wanting to live up to his father’s legacy that causes him to be so impetuous, but either way we are liable to be forced to endure Damian maturing again. Hopefully it will happen quickly, because the character is only tolerable in small doses with this attitude.

A PILE OF HOMAGES

The first thing that stood out to me with the art in this issue is the several homages to previous DC scenes. The first time we see Bruce in this issue, he is sitting in Wayne Manor in the darkness in the same scene famous for him being inspired to become the Batman. Gleason frames the shot in the same way, such that I half expected a large bat to come crashing through the window. Later on when we first see Bruce and Damian in full cape and cowl together it reminds me of the Frank Quitely scene with the two of them in the Batmobile (or Batplane; I forget which it was at the time). Interestingly, Gleason didn’t take the opportunity to draw the stereotypical Bruce standing over his dead parents when the pair went to Crime Alley–it fits in well with the tone Bruce is taking with regards to the whole sordid affair, wanting to remember them for their lives rather than their death (a bold step for Tomasi to take, and an opportunity for him to leave his fingerprints in the Batman legacy).

Gleason’s pencils have their highs and lows; I like how he draws Commissioner Gordon and Batman, but I haven’t fully decided what I think of his take on Damian. An important plot point to the issue is that currently, Bruce doesn’t consider Damian to be Robin–he’s just his son, and has to earn the right to be Robin. As such, we can consider him to be just a kid in a costume, and that’s how Gleason’s art of Damian in the Robin costume comes off to me. It never quite looks like the costume fits him right, and if that’s what Gleason was going for, then he did an incredible job. Some of his other art comes off a bit wonky to me (see: the kid in the foreground of the pool scene when Batman drains the pool), so I don’t know if the Robin aspect is intentional, but I really hope so. Overall I liked the art; the villain is delightfully creepy, and the Russian ally of the Bat was a neat character design, even if he appears to be dead already.

BOTTOM LINE: Of all the Bat-Titles in the Relaunch, It’s Certainly a Bat-Title

I liked this issue, though maybe not as much as Batwoman this week, and certainly not as much as Demon Knights. Tomasi has done good stuff with Batman and Robin with his White Knight arc, but I am not sold on his interpretation of the Bruce/Damian dynamic. I am cautiously optimistic, and as such give this issue three stars.