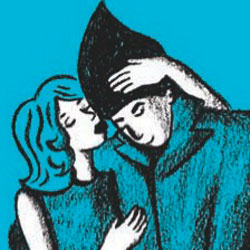 Archaia Entertainment to publish English-language version of The Sigh

Press Release
Award-winning graphic novel publisher Archaia Entertainment has set a November release date for the English-language version of The Sigh, a fable from Marjane Satrapi, acclaimed author behind the international bestseller, Persepolis, it was announced today by Mark Smylie, Chief Creative Officer of Archaia Entertainment.

Following its debut in France and Spain, U.S. fans of Satrapi’s work have waited patiently for The Sigh to arrive in the U.S. The Sigh follows Rose, one of three daughters of a rich merchant who always brings gifts for his girls from the market. One day Rose asks for the seed of a blue bean, but her father fails to find one for her. She lets out a sigh in resignation, and her sigh attracts the Sigh, a mysterious being that brings the seed she desired to the merchant. But every debt has to be paid, and every gift has a price, and the Sigh returns a year later to take the merchant’s daughter to a secret and distant palace.

The Sigh will be presented as a 6” x 8” hardcover, featuring 56 pages of text and beautifully hand-drawn color illustrations. The Sigh will release with a retail price of $10.95.

“The Sigh is a timeless fairytale that promises to capture the imaginations of readers both young and old,” said Smylie. “Marjane is one of those rare writers who has the ability to connect with readers on a global scale and we are proud to bring this story to the U.S.”

Following the publication of Persepolis, a dramatic illustrated account of her experiences in Iran during the Islamic Revolution, Marjane Satrapi has captured the hearts of people throughout the world. Along with The Sigh, her other projects include her second feature film Chicken with Plums. Based on her graphic novel of the same name, Chicken with Plums is currently causing a stir with attendees at the Venice Film Festival. Drawing upon its past success with publishing foreign graphic novels for English-speaking readers, such as The Killer, Okko and The Secret History, Archaia is positioning The Sigh as the vanguard of a new wave of foreign titles it will be publishing in the next several months.

About Archaia Entertainment
Archaia is a multi-award-winning graphic novel publisher with more than 50 renowned publishing brands, including such domestic and international hits as Mouse Guard, Return of the Dapper Men, Gunnerkrigg Court, Awakening, The Killer, Days Missing, Tumor, Syndrome, Artesia, The Engineer, and an entire line of The Jim Henson Company graphic novels. Archaia has built an unparalleled reputation for producing meaningful content that perpetually transforms minds, building one of the industry’s most visually stunning and eclectic slates of graphic novels. Archaia was named Graphic Novel Publisher of the Year according to Ain’t it Cool News, Graphic Policy, and Comic Related, and was honored with nine 2011 Eisner Awards nominations. Archaia has also successfully emerged as a prolific storyteller in all facets of the entertainment industry, extending their popular brands into film, television, gaming, and branded digital media.